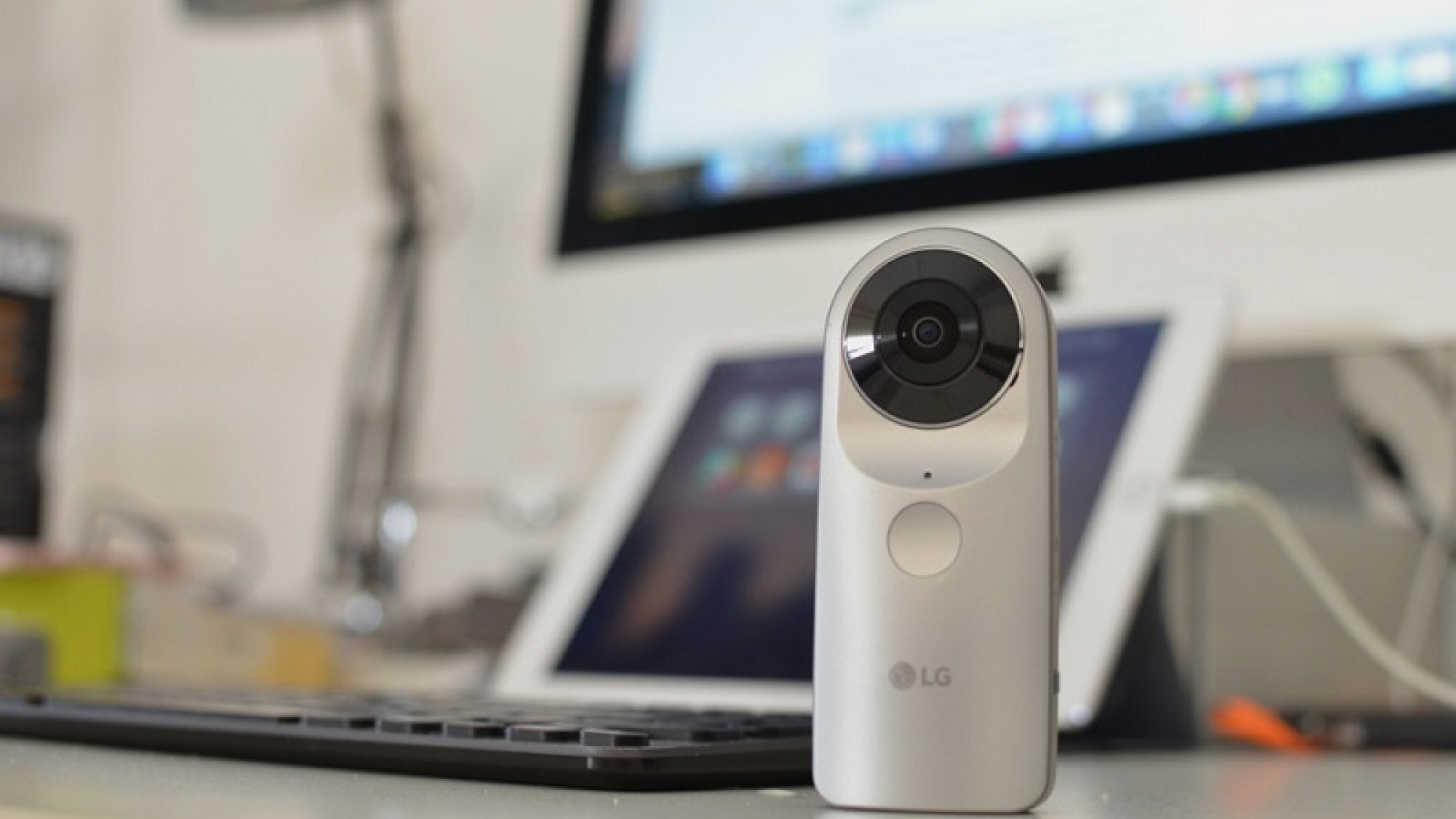 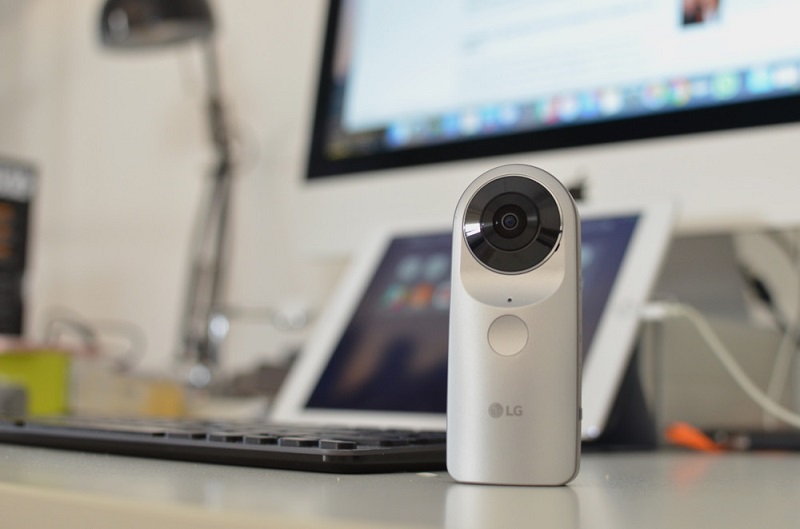 What is that? Few people are able to guess any more see the LG CAM 360 is a video camera and photo. The unit is fairly compact, which helps pass quite unnoticed in general, good finish and is protected by a casing which is very easy to remove and place.

This case is one of the successes in terms of design of the CAM 360 degrees because with it keep the camera well protected and we should not fear for her although we carry in a purse or backpack anyway. This cover turns the camera from standby mode.

Physical controls are scarce and found the minimum – shaped button (on the side along with LEDs that indicate what shooting mode and have activated recording) and shooting. The latter has two options: a short press makes photo, and a long as a second video. There is a small beep that indicates that we made the photo or video started, and an LED that, if so intermittent lighting up, indicates that video recording is active.

At management level, no more options on physical controls. Or button to choose such resolution or something as basic as being able to switch between photo / video 360 or 180 degrees, which only admit exchanges via application. There would have been wrong to have them directly into the camera.

At the bottom are the main connections of this accessory. By a cover to the charging port, which is accessed USB-C type, which is for us a drawback if you do not have at least one terminal and is loaded with this port? No charging cable LG Cam 360, and in our case more times than we wished we have found no battery and assimilated that we carry a USB-C cable for recharging or PC connection.

Next to the port is located the microSD card slot, which we must have in place to record content. In the lower area it is where the tripod socket is located.

If you were thinking of using it as action camera, write something important: it is not waterproof or shock. As for autonomy, in our test it has given us more or less for one hour of continuous use.

The operation of the LG 360 Cam is quite simple as we have seen, can do the basics without intervention smartphone or application, but whether lest we appear in photos or videos of 360 degrees holding the camera, we can also control the functions from the application. Just place the camera where we want to take a picture or record a video and, to the extent WiFi-Direct comes, we can shoot and change parameters like photo / video will be 180 or 360 degrees, as well as which of the two chambers it is considered primary.

The logic will use automatic mode, but if you need or want, there are some manual controls such as sensitivity, something that can take advantage in night scenes where there is not enough light and do not mind the noise is the protagonist of the video.

A peculiarity of the application is that it forces us to download the video we have done before viewing in the gallery. No option to play it from the camera. And there are videos that are downloaded in a few seconds or occupy less (at maximum quality, a video of a minute and a half weighs about 200 MB). In a camera of this type without screen, the videos will surely end up discarding before sharing or want to save will be mostly by those who have to download them all then delete it is an unnecessary nuisance.

With images that’s possible without downloading preview snapshots of the LG Cam 360. In any event, in the gallery of the application icon is no indication by the pictures and videos that have already been downloaded to the terminal, so that we can manage from there the contents of the memory card.

Another drawback we found in the 360 – degree camera from LG is the connection once paired by Bluetooth, WiFi is by making content sharing or upload it to services directly is not possible. We will have to go to settings, disconnect from the wireless network that creates 360 – degree camera and connect to the home or office to begin the transfer videos and photos to services like Flickr, YouTube or Instagram.

Where and how to upload videos and photos in 360 degrees?

If we are to reproduce and display video and pictures of 360 degrees on the phone itself, no problem. In the application itself can be done, and there is another called Viewer LG 360 Cam, but for playing outside the smartphone we will need to find a service that supports video and photo format at 360 degrees. YouTube and Facebook for videos and Flickr for photos are those that have served us better. In the case of the most popular social network, performance is perfect.

On these sites for both video content and photos you do not need to edit any information for systems to recognize them as content 360 degrees, something that does that have to do with some other camcorders on the market.

The video recording mode offers a maximum resolution of 2560×1280 pixels, with acceptable quality for a camera of this type but far from what we leave cameras dedicated action. Beyond the display screens of smartphones or PCs, you’ll notice the difference easily. In addition there is no slow motion mode.

Another handicap is that this camera lacks optical stabilization, and although the video mode achieves a correct stabilization when we walk or even playing sports, this option believes it is essential for a camera of this type.

As for the photos, the biggest attraction is that services like Flickr, which lets you upload photos to 360 degrees, can move freely and gain instant full view of where and how the picture was taken. Use it to something else not see it, but it’s a fun way to take pictures but the quality (the highest resolution is 16 MP) is very fair.