Solid performance and exceptional attention to detail for the most powerful video card on the consumer market. With the release by NVIDIA of the new Turing architecture, numerous were the custom video cards proposed by the various brands and ASUS, a leading company in the sector, did not miss the opportunity to present the waiting range STRIX, the renowned series designed for gaming without compromise in terms of performance and build quality.

The ROG STRIX RTX 2080 Ti OC, the subject of today’s review, is not only the top model of the Taiwanese company, but is also the most powerful card that can currently be found on the consumer market.

Under the classic and aggressive look STRIX hides a redesigned PCB, whose components exploit the Super Alloy Power II technology ensuring a high resistance to heat and corrosion.

This allows to increase the longevity of the components up to five times compared to the other market proposals and above all not to incur electric problems, the so-called “coil whine”. 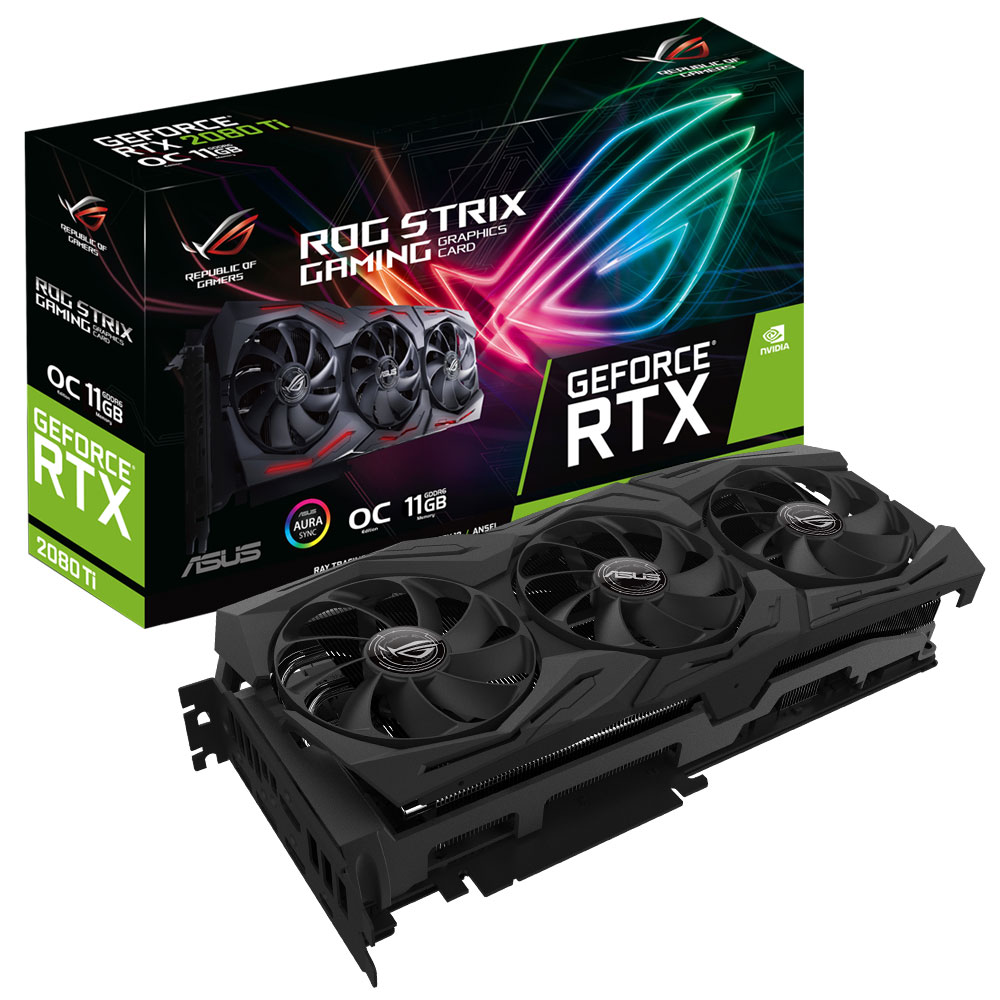 Like the other high-end ASUS models, the ROG STRIX RTX 2080 Ti OC is also produced using Auto-Extreme technology, which automates the production chain by eliminating all types of errors and ensuring maximum reliability.

The RUS STRIX RTX 2080 Ti OC of ASUS is equipped with the classic and elegant total black livery enriched by numerous RGB LEDs, which incorporates inside a dissipation system significantly higher than that seen on the previous generation, characterized by a new set of fans axial (Axial-Tech) of 80mm which, thanks to the longer blades and the insertion of these inside a ring, manages to direct the air flow more precisely and directly on the dissipator reducing the dispersion.

The fans also have the IP5X certification that protects them from the intrusion of solid particles and the access of liquids.

The generous dimensions of the board (which pass from 2.5 to 2.7 slots) have allowed ASUS to use an aluminum heatsink with a surface increased by more than 20% compared to the previous generation in order to ensure excellent temperatures even in presence of extreme workloads.

The card is also equipped with a dual BIOS (Performance and Quiet) that allows you to choose between 0dB (Quiet) mode, which leaves the fans motionless when the temperature is below 55°C and Performance that guarantees the highest possible performance.

Also present MaxContact, the proprietary technology of ASUS introduced with Pascal boards, which allows high conductivity thanks to surfaces up to ten times smoother and homogeneous.

Of meat to the fire so there is really a lot, but before proceeding with the detailed analysis of the ROG STRIX 2080 Ti OC we take a look at its main characteristics.