Working of optical fibre principal: this is what it is, what are the differences with ADSL and some advantages on the speed and technologies of this type of internet connection. The optical fiber, although in the specific would be better to say the fiber optic cable, is a data transmission technology on the internet at high speed constituting the invisible skeleton structure that today allows us the connection mode and communication in the which we are constantly immersed in. Optical fiber is what allows us to exchange data, even the most complex, in real-time all over the world. 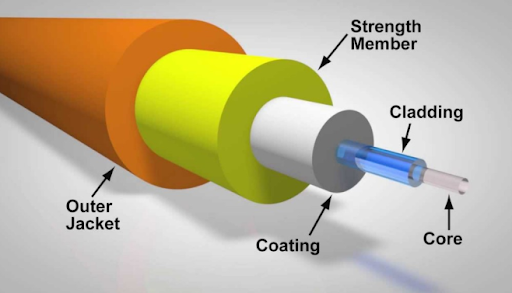 It allows us to have an internet connection in our home or office, with transmission performance far superior to the traditional ADSL copper pair, also called twisted pair, which exploits the pre-existing telephone network to achieve the same result, but with significantly lower results in terms of speed and bandwidth, which determines the amount of information that can be transferred.

However, ADSL in certain areas of the world, now less and less numerous, is not an alternative but the only option to be able to serve that part of the population with the internet, not yet served by appropriate fiber optic cables, either for low commercial impact or for technical problems due to the roughness of the territories to be crossed with the cables. Optical fiber has suddenly changed our relationship with the web. However, problems of this type are now disappearing.

Only 20 years ago the internet was a cumbersome thing, you had to turn on another device that emitted strange and unmistakable noises and you had to connect to the network, almost physically. With optical fiber, on the other hand, the network is something in which we are literally immersed, it silently permeates any home and public space, it is something that is not seen but which is always on in any domestic or even public environment.

What is optical fiber?

The optical fiber is nothing more than a cable formed internally by numerous transparent cables in glass fiber or plastic polymers covered with a rubber sheath, each of which is as thin as a hair. Compared to the copper pair typical of traditional telephone lines that allow ADSL connection, the fiber optic cable has the ability to carry a very large amount of data per unit of time.

Moreover, being lighter and made of very flexible material, resist much better to electrical and atmospheric disturbances, such as sudden changes in temperature, and also without suffering decreases signal over long distances. For this reason, fiber optic connections are much more efficient than traditional ADSL which travels through simple twisted pairs of branches: it is the material. Now let’s see specifically what are the other significant differences between the two connections.

The appreciable differences between optical fiber and ADSL in terms of performance obviously arise from the different materials of which the respective cables are made. The performance differences are calculated on the basis of two main parameters, namely the download speed (literal download) of a data package from the web and the upload, i.e. upload, of a similar data package from your computer to the web. The maximum speeds that can be reached with an ADSL connection are around 20 Mbit / s in download and 1Mbit / s in upload. With fiber optics instead, you can get to 1 Gigabit/s download if the cable arrives directly at your home ( FTTH Fiber ) and at a download speed between 100 and 300 Mbit / s if the fiber arrives only at the nearest street control unit ( FTTC Fiber ).

Installing a fiber optic internet line at home is therefore the necessary step to take advantage of all the most modern advantages of the network and of the communication and data exchange methods available today. Here are a few:

To make sure that your internet connection to the optical fiber always travels at a speed of 1 Gigabit per second, remember to check the compatibility of the devices used to access the internet, that is, that they are able to sustain such a high speed. Therefore, check your modem, the network card of your computer and the ethernet cable (the yellow one), which must always be category 6E or higher if you use it instead of Wi-Fi. These are the factors that determine the connection speed due to the hardware of the devices that you normally use to connect to the internet.

There are also factors determined by the software installed, by the number of devices connected to the network at the same time or by the amount of traffic that the site on which you are browsing at that moment is recording. There are also factors related to the optical fiber transmission technology, totally independent from what we use at home, as we have already mentioned. This technology is defined by the English acronym FTT (Fiber To The) and indicates within the network architecture, from time to time, the distance between your modem and the point where the fiber connection. We can therefore have optical fiber with technology:

In the first three cases, the distance that remains between the fiber and your modem is covered by the traditional copper pair of ADSL, which is why the performance of your home line will be closer to a traditional connection than to a fiber. real optics. The FTTH optical fiber, now widely spread over almost the entire national territory thanks to the great Open Fiber project which has seen the collaboration of the major telephone companies operating on the Italian territory, is the only one that guarantees you a 1 Gigabit connection speed / S.