Skip to content
HomeTech NewsIntel gets the batteries for 2019: Sunny Cove is its new architecture in 10 nm and its integrated GPUs will be more powerful than ever

The end of the year is a good opportunity to talk about everything that one projects for the next, and Intel have wanted to forget some of his recent missteps and dedicate a very special day to talk about his immediate future, which will be loaded with news Relevant

The first one is its new Sunny Cove architecture, which will arrive in 2019 and which will finally make the leap to the 10 nm process that we have literally been waiting for years. The second, the improvements that will offer their future integrated GPUs, with a generation of graphics processors that will leave (very) behind the current Intel HD Graphics.

Sunny Cove and the 10 nanometers

Sunny Cove will continue to be derived from Skylake, the architecture that debuted in 2015 and which was supposed to be the last step before the jump to 10 nanometers.

As we know, the thing was very different, and Intel has extended the life of the manufacturing process of 14 nanometers exceptionally with several generations of processors that have been refining their performance without the improvements were especially notable between them. 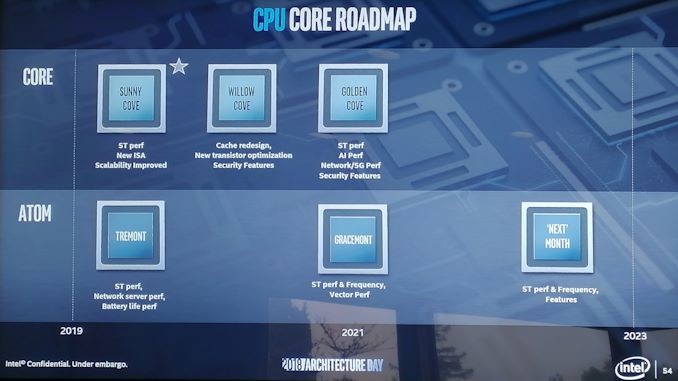 With Sunny Cove that will change: this architecture will allow more instructions to run in parallel with lower latency, increase the level 1 data caches, and also speed up the compression tasks, which will gain 75% speed according to preliminary Intel data.

With this architecture will also come a big change to the virtual memory support? So far, although the memory addresses were 64 bits, there were only 48 useful bits and an upper limit of 256 TB of memory in both Intel and AMD processors.

Sunny Cove will take advantage of 57 of the 64 bits, which will allow access to a virtual address space of 128 PB and a total of 4 PB of physical memory, room for maneuver more than enough to work even with large data centers and supercomputers. The most powerful supercomputer in the world, the IBM Summit, has “only” 2 TB of memory, for example.

Intel will take advantage of this architecture for both its Intel Core family of processors and the Intel Xeon. The first will arrive in the second half of 2019, with their successors, Willow Cove, ready to appear in 2020 and with Golden Cove in 2021. In the case of the Intel Xeon the roadmap is not so clear and there are no dates, but much of the year will continue to be dominated by Cascade Lake, still at 14 nm.

Another of the important announcements of this event has been the one that affected the integrated graphics chips (iGPU) of the so-called Gen11, which will have more than twice the number of execution units (from the traditional 24 to 64) and that will allow to reach gross performances. Of more than 1 TFLOP in floating point operations.

The so-called Units of Execution (EUs) will also be multiplied, and for example we will move from the traditional 24 EUs of most of the current nuclei to up to 64 EUs in configurations of four blocks of 16 EUs each. 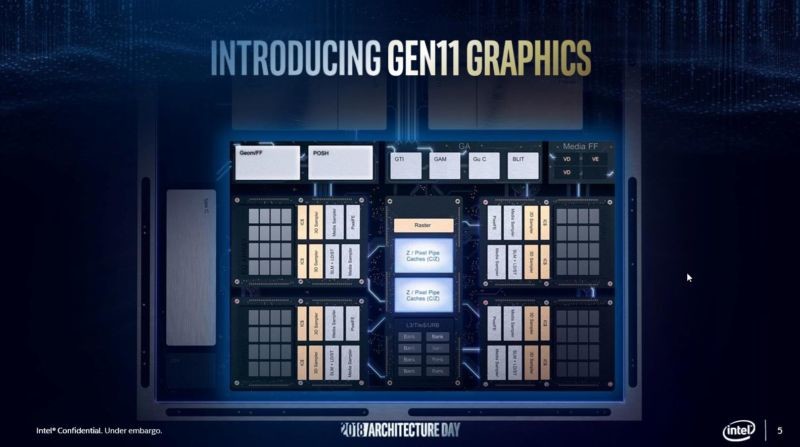 These blocks will make use of a “tile-based” rendering that saves memory needs in GPUs, and here the solution is very similar to that offered by the Mali and Adreno GPUs of ARM processors.

These graphics chips will also pay special attention to the hardware decoding of the HEVC / H.265 codec with 4K and even 8K video support and also with support for HDR and Adaptive Sync technologies which are basically the “standard” version of the FreeSync. AMD

According to Intel that will allow these chips are enough to make some games today unplayable in micros with current integrated GPUs can be played, yes, with 1080p resolutions and low or medium detail levels. An interesting development that we will nevertheless have to evaluate when these new graphics processors, which will be part of that Sunny Cove family, appear in the market.

Little or nothing advanced Intel of its future dedicated graphics cards , whose architecture will apparently be known as “Xe” and that will contemplate solutions of all kinds, from low-end to high-end, both in gaming scenarios (this is especially promising) and in the field of data centers.