Skip to content
HomeHardware ReviewsCorsair One i160, a whole Core i9 and RTX 2080 Ti in a compact format

In the PC gaming market, the large and spectacular size is what usually prevails. But there are PCs for gamers that escape from trend dicah.

The Corsair One i160 is a new compact gaming computer model from a company fully focused on the world of gamers. We have already been able to test it thoroughly to see if a Core i9 and the RTX 2080 Ti chart perform as they should in a compact format.

Corsair One i160, data sheet

The family of desktop computers Corsair One is composed of four models with features (and price) that are growing numerically with the series. The most basic is the Corsair One i140, while the most ambitious model, with a price of 5400 dollars, and is the i180 (with the Intel Core i9-9920 X processor) as a reference.

The model we have tested is the Corsair One i160, with a price of 3189 dollars and the following technical sheet …

Maintaining the configuration and basic design of this family, the Corsair One i160 stands out for the combination of the Intel Core i9-9900K processor and the RTX 2080 Ti graphic, which alone costs more than 1200 dollars.

Of course, for its final price of more than 3000 dollars, having a SSD of only 480 GB is a priori the limiting element of its specifications, completed with 32 GB of Corsair memory of which we will talk later, as well as the efficient liquid cooling of both the CPU and the GPU. 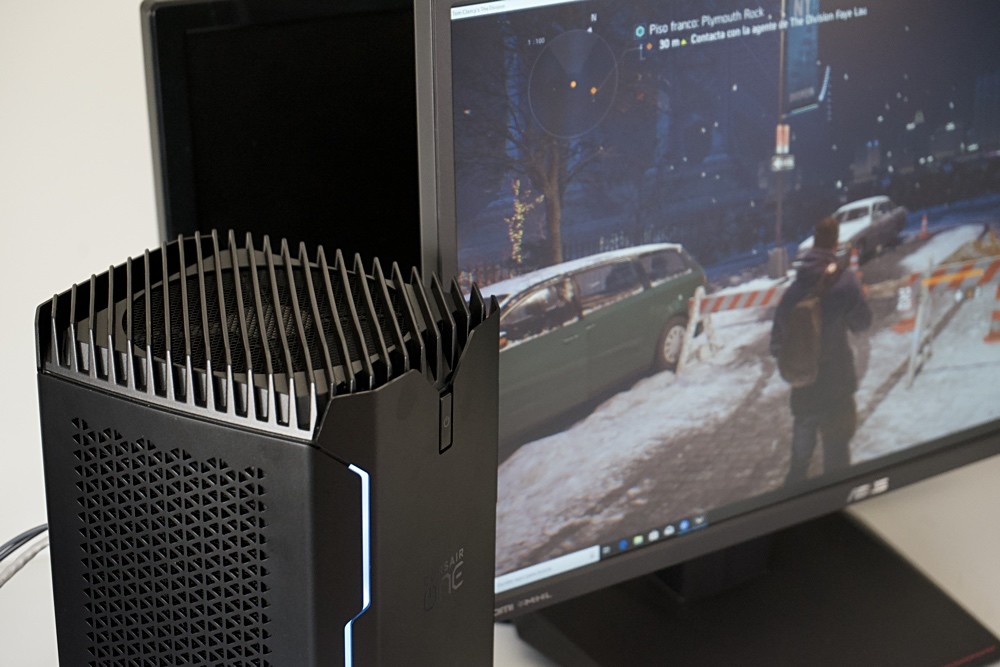 A PC Gaming that will not occupy much space

The same box and layout in which the Corsair One i160 is well protected from the US leaves no room for doubt: it is not just any gaming PC. Not the heap. We had already realized by the price, very high even for the internal specifications of the equipment.

Clearly we are facing a very compact desktop gaming team (12 liters, less than half of the usual in classic desktop computers). Of course, it is quite heavy but that finish and design of the metal box is very nice visually.

The only references to that we are in front of a gaming desktop are found in the two LED strips of the design, which can be configured to display colors in a synchronized or personalized way. The LED strips, although they appear to be continuous in their design, offer four different zones each one.

There would be no use for a compact gaming PC that shied away from a good and sufficient configuration at the port and connectivity level.

In the front, where it is always grateful to have connectivity no matter how aesthetic, the user has an HDMI 2.0 port, two USB 3.1 type A ports as well as the audio input / output in a single jack.

Already in the back we see the bulk of the connectivity of the Corsair One i160, including by surprise a PS / 2 port that gives a touch too old to the team but allows to take advantage of good peripherals that still use it.

In this rear area, the user has six USB ports divided into two USB 2.0 type A, two USB 3.1 type A, one USB 3.1 Gen2 type A and another type C also 3.1. Here the connectivity is somewhat limited by the plate, specifically a Z370 and somewhat outdated for the price and aspirations of this team.

There is no lack of Ethernet, WiFi (with two external antennas that can be placed) and Bluetooth 4.2, as well as audio connectors and graphic outputs formed by the 3 DisplayPort 1.4 ports of the graphics card. No other graphic port is available, which forces us, in case of wanting to use HDMI connectivity, to resort to the front port, arranged there imagine that for the most direct and comfortable placement of peripherals like augmented reality helmets.

A configurable interior … if you drive in small spaces

The Corsair One i160, despite being a compact device, supports the modification of internal components by the user. It is not a priori the main objective of its design or a feature by which we would choose this desktop gaming on others, but that option is always added.

The opening of the box is not completely direct. First of all we must remove the “lid”, made up of the main fan of the system. We can do this by pressing a button, which is really hard and we can hardly do force with a finger. A system with at least one larger button would have come better. 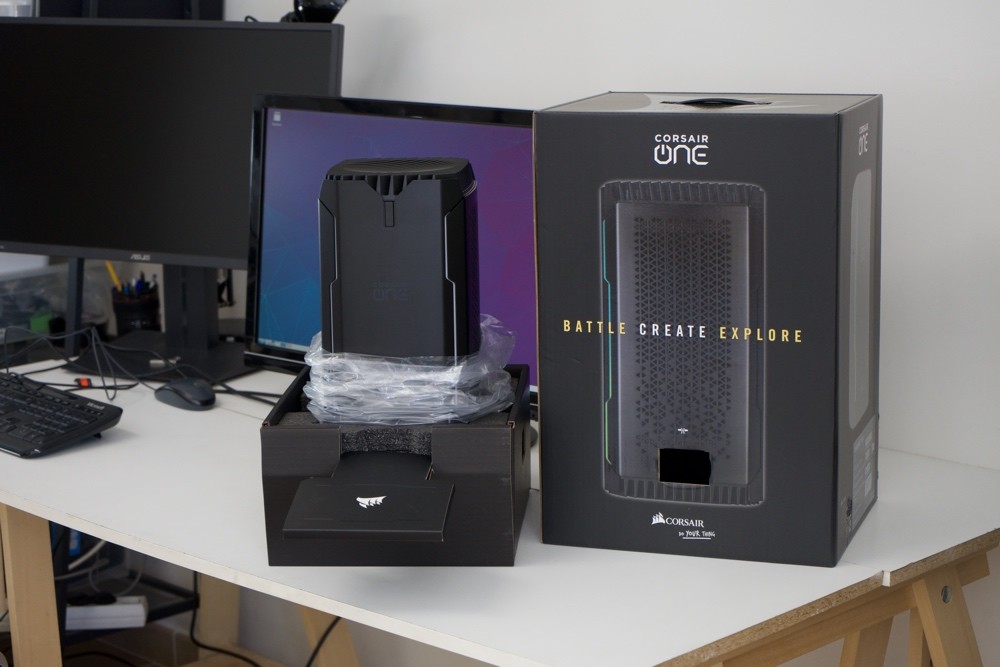 Once disconnected and removed the fan, we can appreciate that precisely space is not what we have left in this Corsair One i160. From this area we already have access to the sides of the equipment, which however and by surprise, require a screwdriver to continue opening the box.

Here, after being able to remove the first cover without tools, we hoped to continue discovering areas of the equipment without the need for a screwdriver. Possibilities to do so had.

Once the two screws that hold each of the two sides that give access to the main components of the equipment have been removed, it is necessary to intuit that lifting these panels slightly releases the same. Again some trial-error versus what should be intuited.

Although in this situation we can already contemplate the powerful and dense interior of this Corsair One i160, access to internal components is complex if we do not remove the liquid cooling system, whose radiators are screwed to the side panels. It is in fact essential to do so to fully access the graphics card, under which the main SSD is, one of the components that the user of this desktop computer could previously want to replace.

On the other accessible side we have direct access to RAM, storage of 2 TB SATA (Seagate Barracuda at 5400 rpm) and also the processor. The possibilities of enlargement are limited by the available space and the comfort to realize them logically they are far from what we find in a much bigger box.

Actually, with the configuration made up of the Intel Core i9-9900K and the Nvidia GeForce RTX 2080 Ti, it will be time until we see ourselves in that position, something that we could do as we pointed out earlier with storage (somewhat poor the 480 GB of SSD, from Samsung) or RAM memory, although in the latter case the two slots are occupied by the 32 GB of serial memory. Logically here we have a Corsair Vengeance LPX (2666 MHz).

Performance of the Corsair One i160

With a data sheet like the Corsair One i160, the overall performance of the team is more than assured. Given its high price and specifications, it is not a usual buying equipment for tasks that do not include gaming, but we leave in any case the figures of its general performance according to our usual tests with specific software for benchmarks.

Another test where the processor premium, GeekBench 4, uploaded the Corsair One i160 to the highest of our tests so far: 31457 points.

If we go to the tests where the graphic factor begins to take center stage, this Corsair One i160 again demonstrates its great power thanks to the most powerful graphics card on the market today.

As for storage, it is surprising at this point that you choose a secondary storage of the classic type, with a 2 TB hard drive but at 5400 rpm. But in this configuration, with only 480 GB of SSD storage, it was necessary.

The good news comes from Samsung’s NVMe SSD, which offers a performance that is in line with expectations and within margins that do not represent a step backwards for the team. The maximum write and read speed is 1340 MB / s and 3079 MB / s respectively. 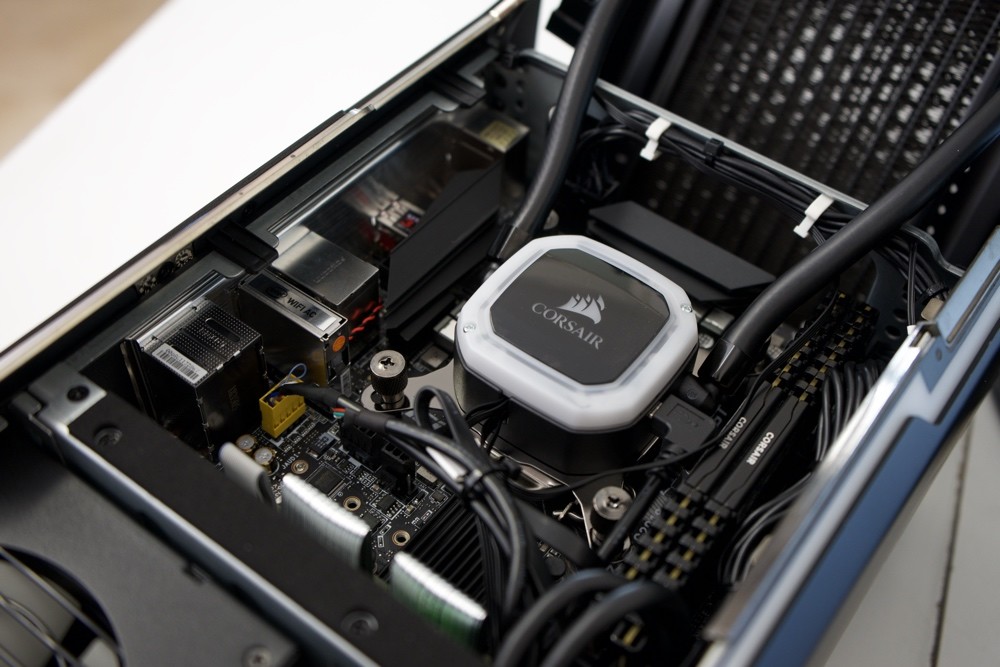 Very silent and with controlled temperatures at all times

A not inconsiderable feature of this Corsair One i160 is the incredibly quiet operation that has presented in our tests. The use of a liquid cooling system is a success here, and it is the desktop gaming equipment that is less present at the noise level of all those that I have tried in recent years.

With a basic operation it is very difficult to appreciate that the equipment is actually on, but when we demand a maximum performance for work or play, the noise in operation is really low and, although clearly appreciable, does not bother at all.

The Corsair One i160 has a design and configuration that is not only visually attractive but also reduces the noise in operation as well as the maximum temperature of the components, even in situations of maximum demand.

Also the cooling system and equipment design contributes a lot to the heat level of the components. According to the internal sensors of the equipment, operating temperatures are well defined for a long service life of the components and do not face any problem due to excessive heating over time.

At rest we did not exceed 35 degrees Celsius while playing, the average CPU and GPU was quite similar, on average around 70 degrees but always below 80 degrees.

If one chooses to invest a huge amount of money in buying the Corsair One i160 equipped with the Core i9 and the RTX 2080 Ti graphic, it does not consider not being able to play any title of the current and future market at the highest quality and in 4K resolution.

In fact, seeing the first graph with the results of our test battery with games at 1080p resolution and maximum quality, with fps higher in all cases at 100, this Corsair One i160 is far above what we would need for a more full play to said resolution.

If we now test the Corsair One i160 with games at 4K resolution and maximum quality, the results, except in the case of Final Fantasy XV, remain above 50 fps, and in many cases, exceeding 60 fps we can mark as a no-return line for the 4K game.

Speaking of playing, both the external lighting part of the equipment and the specific configuration for certain tasks is managed by Corsair’s own software, which is almost the only extra add on Windows 10, as this Corsair One i160 comes free of bloatware.

The configuration application is called ICUE and in it we have different options available, from the own choice of colors to detailed information on the performance and characteristics of the equipment in question.