Only a few weeks ago Amazon had expanded the already rich family of smart devices with the launch of Echo Input, but the Seattle colossus’s ambitions to bring their voice assistant Alexa into homes do not stop there, and in fact we are already presenting you a new product just arrived on the virtual shelves of the store: Amazon Echo Show combines a smart speaker with a 10-inch tablet and adds new and interesting applications to Alexa. Let’s see them in our review.

As for the other devices of the Echo family, inside the Echo Show packaging we find only the essential: the device and a 30 Watt mains power supply.

The front of the Echo Show, measuring 246 * 174mm, houses the large 10.1″ display with HD 1280 * 800 resolution and 450 nit brightness, above which there is a 5MP and 4-hole camera for as many long-range microphones. The maximum depth is 107mm, with an irregular shape and covered with sand-colored or anthracite-colored fabric, and weighing 1755 grams. On the top there are the volume keys up / down and the key to deactivate microphone and camera, as well as four other long-range microphones that lead to a total of eight microphones. On the back are the power port, a microUSB port (which cannot be used for power supply) and a Kensington lock slot. Absent the 3.5mm audio jack that we find in all other Echo’s. 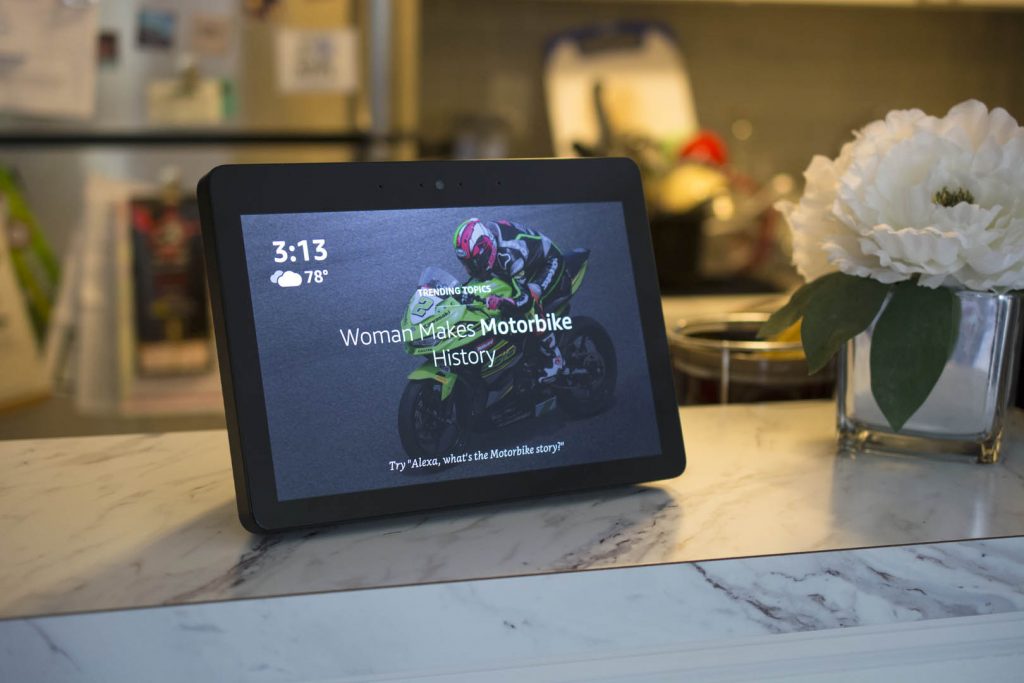 Inside Echo Show there are a pair of 50mm neodymium stereo speakers and 10 Watts each with Dolby Audio, plus a passive radiator to emphasize the bass. Connectivity includes dual band WiFi 802.11 a / b / g / n / ac with dual antenna and MIMO technology (Multiple Input, Multiple Output) to improve connection quality and Bluetooth 4.2 to transmit Echo Show audio to an external system or to use it as a speaker connected to a smartphone. Present, as seen for Echo Plus, also a Hub Zigbee (802.15.4) to connect to smart home devices such as light bulbs and sensors.

The heart of Amazon Echo Show is an Intel Atom x5-Z8350 processor, equipped with 2GB of RAM and 8GB of storage memory, while the operating system is a variant of the Fire OS already seen on the Fire line tablets, then based on Android, but applications cannot be installed manually.

Echo Show is available on Amazon for $ 229.99. Also available a support to adjust the position of the device and better orient the camera, at a price of $ 29.99. At the moment there is also a bundle that, at the same price as an Echo Show, adds a white Philips Hue smart light bulb.

Echo Show was the only one of Amazon’s smart devices launched in markets but that was still missing in our country, so we expected its arrival within the first months of the year. We had a first taste of Alexa’s features associated with a display with Echo Spot, a product particularly suitable for the bedroom, and now we can finally fully experience them on a larger display.

The first configuration of the device is even simpler than in the other Echo: once connected the power cable just follow the on-screen instructions to connect to the WiFi network and enter your Amazon credentials. A few simple steps and our new show will be ready for use.

Of course the heart of Echo Show is the same artificial intelligence that we already know and appreciate, so we can ask Alexa to play a music playlist, the latest news, to answer some questions or manage our smart home. As already seen for Echo Plus, the integrated Zigbee hub allows you to control compatible light bulbs and sensors without buying a dedicated gateway. 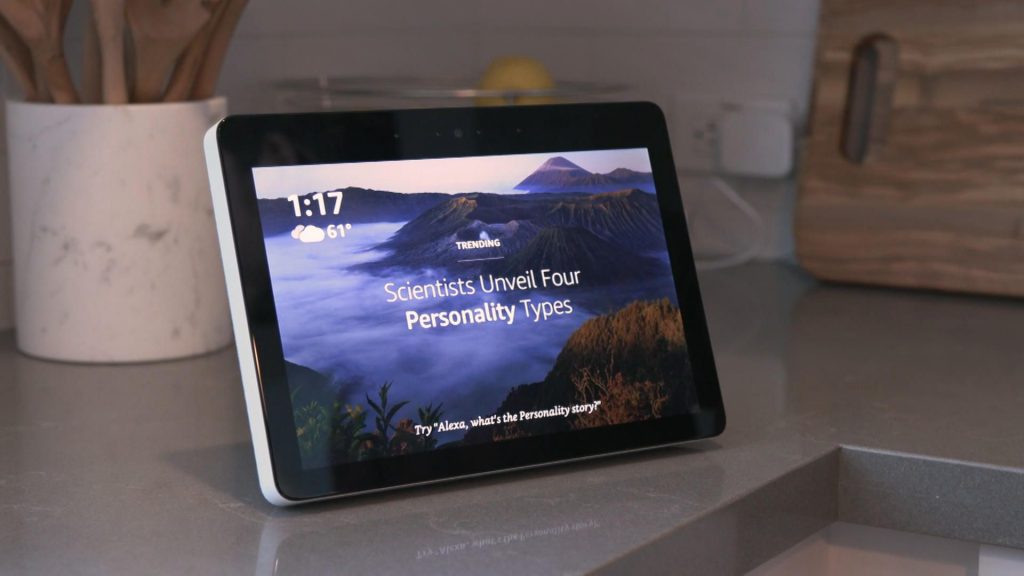 Where Echo Show differs is obviously the presence of the display. With a simple voice request it will now be possible to watch a movie or series from Amazon Prime Video (of course it is necessary to be enrolled in Prime), search for a recipe or consult reviews of hotels and restaurants in a specific location. We can view the covers or texts of the music being listened to, the images of the video or newscast, and even surf the web using Amazon Silk or Firefox, the two browsers pre-installed. Unfortunately it is not possible to display videos from YouTube natively due to the absence of a dedicated skill, but it is possible to do so using one of the two internet browsers included. In this case we suggest using the TV version by typing youtube.com/tv on Firefox to have an interface more suited to the Echo Show display and to see entire playlists in full screen. However, Vevo skill support is on the way, allowing you to watch many music videos on demand.

Among the other applications that make use of the display we point out the possibility of viewing the images framed by a compatible camera, including Arlo, D-Link and EZVIZ, or of a smart bell like that of Ring. We can then make video calls through the Alexa drop-in function to other registered users who have an Echo Show or an Echo Spot or who answer from the Alexa app on their smartphone, and it will soon be possible for users to call Skype contacts. We can also use Echo Show as an electronic frame to view our favorite photos previously uploaded to an album on Amazon Photos.

There is no support for Netflix or other streaming video applications other than Amazon Prime Video, and as we said above it is not possible to install apps in sideload mode, but with a trick similar to that seen for YouTube we can use the internet browser for open for example the websites of RAI or Mediaset and see TV broadcasts live or on demand. Unfortunately you can’t view Netflix videos although this is possible on your smartphone’s mobile browser.

Very useful is the possibility to swipe from the top of the display to lower a curtain that allows you to perform various operations, such as checking smart home devices and routines, all at your fingertips without disturbing any family members who might sleep.

As for the audio aspect, the stereo configuration with Dolby support is able to reproduce a full-bodied and rich bass sound; we can insert Echo Show in a group to listen to music in multi-room mode and listen to the same radio station or playlist in multiple rooms. Echo Show can also be combined with an Echo Sub to further enrich the bass while listening to music; however, the Sub will remain in standby during video playback.

In conclusion Echo Show is the most complete of Echo devices, able to combine all the functions of an Echo Plus, including the hub for the smart home, with those of a smart display. Useful in the kitchen, it can easily replace a small TV and an audio system as well as of course offering all the artificial intelligence of Alexa.