In the absence of new technologies that allow us to make batteries more capable, or due to the fact that manufacturers do not want to design larger models, improvements in autonomy happen to play with faster loads. It is the way leading Qualcomm, that may not be the company that has led the change, but in view of its sales, is leading the roost, followed by MediaTek.

Hardware manufacturers are educating us to charge more times, to have fast charging as a resource to extend the life of an element we need active while we are standing. In recent years this process has been improving people we Qualcomm with its system Quick Charge, now in its fourth generation. 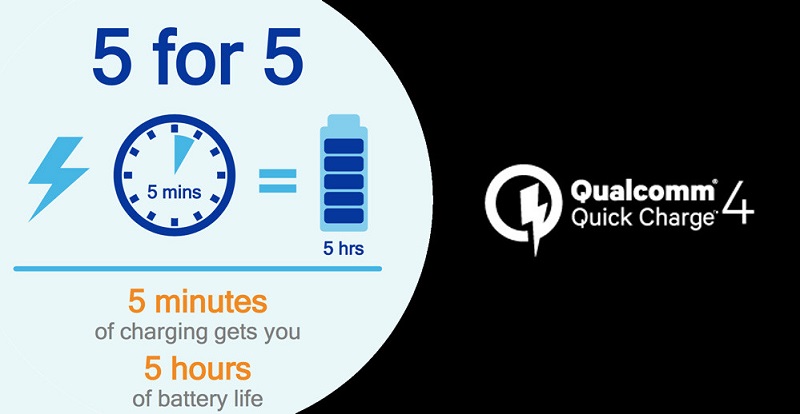 While solving the main problem, which is better batteries, we offer faster loads

In the statistics that manages Qualcomm, the battery is among the most important factors of buying a phone, ranking first duration, and fourthly important we have the protagonist of our article, fast charging.

Quick Charge is now the most commonly used system to reach the hand of the Snapdragon and there are more than 150 manufacturers using it, with more than 600 million devices on the market (phones, accessories).

Quick Charge 4 is a technology that initially cannot divide the new chipset American house, the Snapdragon 835. With it we ensure a loading speed 20% higher than the model we are enjoying right now with Snapdragon 820 and 821 hardware, which use the heavyweights of each mobile home.

Speaking of pure and speed, Qualcomm says its new Quick Charge 4 system can fill your mobile with five hours of life with only five minutes to connect to the network. Half of the battery could be ready in 15 minutes of charging. In the following image, you have the evolution of the system Quick Charge in the time:

You may also like to read another article on Web2GB: Fast charging is a great invention, Why does Apple still not offer that option?

Although we can start talking about the new generation of fast charging, marketing is not expected until the first half of 2017, when there will be a mobile device that makes use of the Snapdragon 835. It will be very interesting to know more about this chipset, Will be developed next to another great protagonist of the “market chipset” as it is Samsung (with technology of 10nm).

Taking into account the Note episode so close, it is normal to emphasize safety in the loading process

The implementation of the charging system contemplated from the outset the type of USB-C connection, reversible and raised to be the only port on devices that can handle the load and data transfer at the highest level.

Also presented is the USB-Power Delivery support, for negotiating the amount of current with the device. According to the specification Qualcomm, mechanisms are contemplated for the system to recognize the quality of the cables used, again in view of increased security.

The idea goes through build on the progress and not remain on tablets and phones, Qualcomm wants to expand its quick charging technology to other fields that have no problem in receiving cameras, drones, virtual reality helmets, wireless carriers, routers, extra batteries, etc.