web2gb.com
Powerful Simplicity
Home » New Gadget  » What virtual reality glasses VR to buy with all the options according to your equipment and budget?

Perhaps, between technological gifts for Christmas, you’re thinking of buying glasses or kit of virtual reality (VR). Few product categories now offer a catalog of options that are so small but different.

Help you choose the best VR glasses according to your budget or computer where you want to use is the aim of this shopping guide where you will have to VR team is the best depending on the money you want to spend, the type of computer or smartphone that You want to use it, as well as the advantages and inconveniences of each of the models of virtual reality helmets that you can already buy.

The decision that matters most: What equipment will you use?

As I told you at the beginning of this guide, few product categories are so segmented depending on where you are going to use the VR glasses. For now the models available in the market have been created exclusively for certain products . And in that you will have to base the first sieve of models.

I want VR on my computer

The product category which has hosted virtual reality with more enthusiasm has been the PC world. And it has been mainly for gaming.

If you want to play and enjoy virtual reality on your PC, the first thing to know is that you need a capable and compatible computer. There desktops, for what we recommend our guide to shopping for a desktop VR and laptops, where we have a wide selection of ready models. 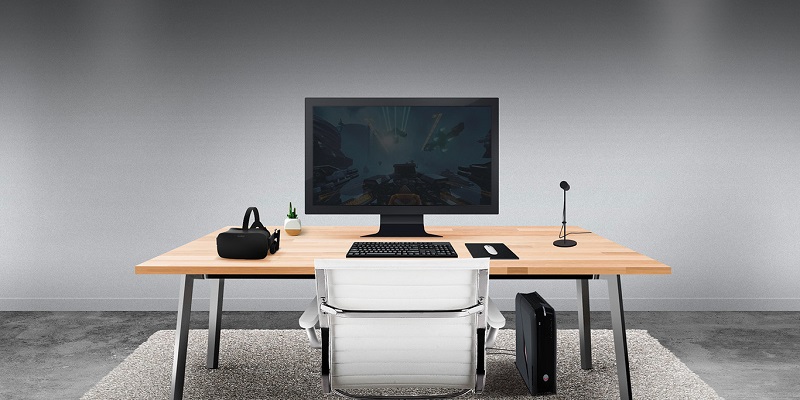 Once with that base, two are the systems and VR glasses for PC that you can buy right now. Both solutions are virtually identical to standard specification, with high-resolution AMOLED screens, sound and built -in microphones, viewing angle of 110 degrees, refresh rate of 90 Hz and control system using controls.

The model that started the revolution, the Oculus Rift, first as a project in Kickstarter and now as part of the giant Facebook, and can be purchased from 699 dollars. Glasses, the need to work sensor and controller are included Xbox One. If we want to complete the experience we can add the own controllers Touch that leave for 199 dollars and that is recommended purchase to take full advantage of the experience and not just sitting.

The support of Facebook is the great ally and at the same time around this solution we remind you that you need to be connected to a powerful PC (physically, cable) to work. Its development has its own store, has a large catalog of games and experiences for this one, but the entry of Facebook can lead all towards less playful and more social aspects.

The great rival of the Oculus has entered very strong market supported by its technical potential and very good references when we tested. It is the model to follow when we talk about immersive game, to really move within a fictional world and not just to move in a virtual way for a scenario, something where the Oculus have focused more on beginning.

That facet that players love is enhanced by the powerful presence of SteamVR Valve and the possibility of using Oculus games with them . In addition it comes standard with two controls that are necessary if we want to go beyond the virtual reality game, which is a way to offset the higher price you have regarding Oculus. The Live HTC can be purchased for 919 dollars.

With the HTC Vive, which includes two sensors that are responsible to place ourselves in the virtual room, it is especially recommended to have enough space, something we do not need with Oculus if you do not use extra controls.

An alternative to the two great solutions already on the market are the Razer OSVR HDK 2. Here only your purchase is recommended if you want to test and develop virtual reality with an open tool. Its price is 499 dollars.

If I have a console these are my options

The game seems the clear winner to pull virtual reality. But curiously only one console is inside now. Sony already has on the market its VR solution for family Playstation 4.

If you are not player console and PC, your only solution for now to make the jump to the game and VR experiences it is Playstation VR, which is priced at 389 dollars.

The clear advantage of Sony’s solution is the price, both VR goggles and the hardware necessary to take advantage of them. All together does not exceed what cost only the VR glasses for PC. They also surpass these in the comfort of use, something that we should not stop to consider if we want to get much game and hours of game / use.

On the negative side we have the configuration. You will not need much space because they are VR glasses invite you to use seated, but be very organized because of the numerous cables you need and limit the experience.

At the level of power and effectiveness of the virtual reality that we get, although it has more modest specifications, Playstation VR does not present great disadvantages at graphic level with respect to the competition, at least in the current games of its catalog. There we also see a disadvantage compared to PC VR solutions.

The third way to have a virtual reality experience now goes through personal glasses and associated with the world of smartphone. Here logically the power or immersion is far from the previous solutions, but there is also much difference in the price to pay.

The VR glasses for smartphones that can be purchased are divided between proprietary solutions captained by Samsung, and glasses compatible with almost any terminal market with a generous screen.

The Samsung and LG VR Specs

The two most serious proposals to have virtual reality with the help of a smartphone in particular is led by Samsung and LG. The Gear VR has been a simple and affordable way to get into this world. Affordable in the sense that the Gear VR cost now about 65 dollars but limited their use to high – end devices of the Korean company, starting with the Galaxy S6.

We should not be fooled by the simple appearance of these Samsung VR glasses. Once placed compatible smartphone can use controls integrated into glasses, and have more field of vision, better optics and track not depend solely on the phone’s sensors but from those included in the hull.

The second proprietary LG solution is presented this year with its franchise LG G5. The LG 360 VR arise almost as an accessory or more of the terminal module and seek above all comfort.

They are very light and allow them to be used for long periods of time. In fact, LG also positions them as a personal viewer for videos that do not have to have a virtual reality component. But do not think of them beyond short and concrete experiences. And its price is not exactly cheap: 180 dollars.

Other manufacturers with their own solutions are OnePlus with its Loop VR or Huawei, although they are models that by now can not be bought in territories that are not China.

Google has been the latest company to join hands through a somewhat proprietary solution. Your new Google Daydream Dream are a VR glasses that need certain models of smartphones to run. These are not models of a particular brand but meet certain requirements set by Google. For now are the new Google Pixel, Lenovo Moto Z, Mate 9 or ZTE Axon 7.

The finish and appearance is a value offered by these glasses. Both come with command control system to provide a solution for motion control with glasses, and is the gateway to the DayDream experience with Google wants to have a say in virtual reality.

The price of these glasses is 79 dollars and for now only be purchased in the US.

Of the most economical and adaptable options for most smartphones in the market there is plenty to choose from. Basically changes the design, finish and ease of use. Here the experience we get depends more on the screen of your terminal than the VR glasses you choose.

The best known are the Google CardBoard and the like. It costs a few dollars, and from less than 8 dollars and you can get the most basic and does not consist of more than a cardboard structure to place the phone inside.

This type of cardboard VR glasses evolved somewhat and we can find models that already have a better finish, usually in plastic or nylon cloth, and that slightly raise their price up to about 15-25 dollars. From these models we can choose for example the VR Leelbox for 19 dollars or something else entirely, the UMI with adjustable lenses that now can be had for less than 20 dollars.

An alternative to these solutions for almost any smartphone but quality is the Carl Zeiss VR One Plus, which cost 115 dollars. Here in addition to the screen of our smartphone, which should be between 4.7 and 5.5 inches (are introduced with an adapter included in this new model), Zeiss puts crystals to enhance the experience and make it more immersive.