The announcement not only affects this mobile operating system reconverted to the desktop operating system, but also has an impact on the company’s hardware products, which will be recalled. Users who invested in their Kickstarter collective financing campaigns will be left without them, but the company has promised to return the money to all of them.

At Jide, they seem to have been frightened by the increasing competition in that ambition for getting a mobile platform to jump to usage scenarios we would normally cover with a desktop PC or laptop.

In fact the alternatives are varied, but that does not detract us so that we regret that decision. Remix OS quickly became a benchmark of where platforms like Android could go if they wanted to conquer the desktop, and proposed a solution to the convergence that would allow using a mobile as a desktop PC, for example.

In Jide explained that after collaborating with several companies have realized that there was a great opportunity in the professional market, “and given our current resources, we have decided to focus our efforts in the business segment from now on.” 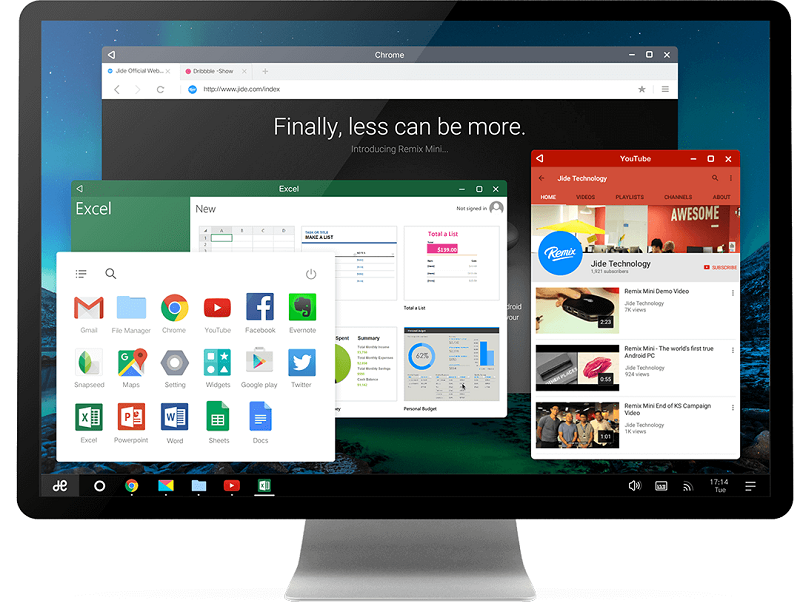 Competition tightens, and Remix OS has not been the only victim

The decision of those responsible for Jide surely makes sense from the financial point of view, but surely many end users who saw (see) Remix OS as a reference in this ambitious convergence will be disappointed.

She is not the only one who has had to throw the towel, although in this case they have done so only partially. Recently Canonical officials announced the definitive farewell to convergence based on Ubuntu, for example.

This was another project that made us realize how interesting it could be to use a phone as a desktop computer thanks to an interface and “adaptable” applications. The complexity was enormous, however, something that was demonstrated with a platform like Ubuntu Touch that never finished being sufficiently mature and that advanced too slowly.

In front of these two projects began to consider alternatives more and more striking of the great. Google Chromebooks are the perfect example, as support Android applications – although the results are still somewhat limited – gave a new meaning to these computers.

In fact there is also that promising announcement from Microsoft and Qualcomm. Both companies demonstrated that Windows 10 and legacy x86 applications could run on a Snapdragon 835, and Windows 10-based ARM laptops are just around the corner. Jide got competitors everywhere, but there were even more projects that threatened its relevance in the end-user arena.

You may also like to read: Windows 10 will run on ARM, how will it affect Android?

Remix OS may demonstrate how well a mobile platform (with its applications) can work on a PC or laptop, but that does not seem to have been enough to capture the interest of industry and end users.

We had not heard of this project in a long time, and perhaps its limited resources have made it want to make the leap to this new business orientation. The alternatives, however, are there, and among them stand out those of these four technological giants …

Obviously, they are not the only ones who can offer that convergent experience with which we wanted to win Remix OS. There are several projects that look exactly like Jide’s, but that seem to have a promising future. Phoenix OS, AndyOS or MaruOS are among them, so it seems that we will have options for all tastes.