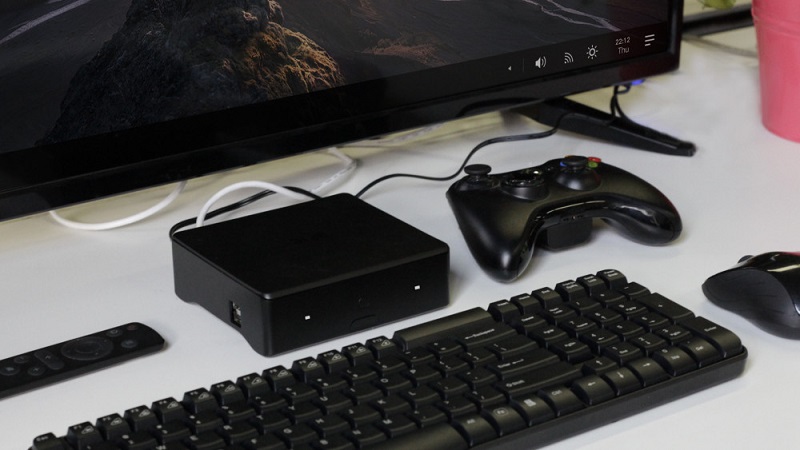 Remix IO is Jide response to devices like the Apple TV, Amazon Fire TV or Roku in a world where more and more connected devices. It is a versatile gadget that can be used in different ways. That has two different display modes, so the experience will be different depending on how you use it.

For example, if we use the device as MiniPC execute normally conventional Remix version of OS. This shows Android with an interface “to Windows” with a window system to open different apps on the desktop and make better use of multifunction options.

However, when it detects that you connect to a television will start its TV mode. This is an adapted television and use with a remote control, and launches all applications in Android TV format interface. We can connect virtually all gamepads compatible with Android, Jide is testing the implementation of the most popular to ensure compatibility before launch in March.

The Remix IO is powered by SoC RK3368 64bit eight-core Cortex-A53 1.5GHz. He is accompanied SGX6110 PowerVR GPU, 2GB of RAM memory and 16 GB DDR3L internal storage expandable up to another 128 gigabytes through microSD. These specifications should be enough to use it to watch videos on TV or miniPC basic though it remains to be seen how capable when running the most demanding Android games.

As for the campaign Kickstarter, it has a symbolic target of $ 300,000hardly fail to comply. Here we can get hold of the device for $ 99 plus shipping, although they have offers for those who want to buy more than one, and even a referral system to get free units.

Once achieved the goal, Jide plans to release a kit for developers to optimize their games to different modes of display devices. The shipment of the units is scheduled for March 2017, and although they have not given an official price glimpse that from then buy will cost a little more.