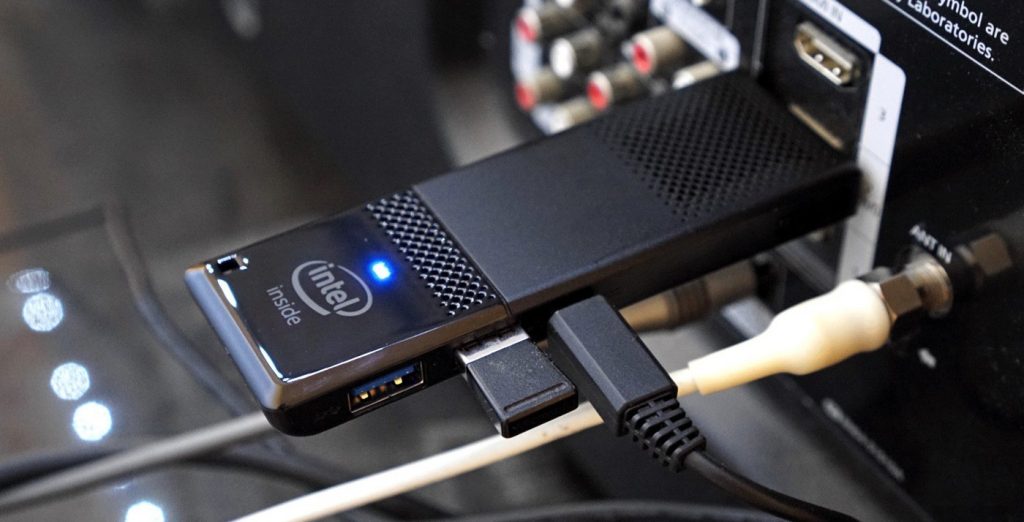 Otherwise the design is very striking and it seems clear that is not a product destined to win any design awards: the housing is spartan, with two vents at the top and a rectangular format with black matte finished except for the part USB connectors in which the plastic has a different texture which among other things allows the blue LED display that indicates that the device is running.

On the left side we find the microSD card slot up to 128 GB, while the right is the button on and off, the power connector for the included adapter (5V, 3A) and two USB ports. We will also have a small safety latch on one side, but there’s no headphone jack: Audio is provided via the same HDMI output logically.

Finally, we have the HDMI connector on one end; it is likely that we cannot connect directly to the TV. The wide format dongle difficult position share this device with other devices connected via HDMI. To fix it, yes, Intel provides an extension cord with an HDMI connector male and one female in each of its ends, which makes it possible to take advantage of the Intel Compute Stick smoothly.

As expected, there have been significant improvements in this edition of Intel Compute Stick in the choice of hardware components. The highlight of all these components is a processor Intel Atom x5-Z8300 quad-core 1.44 GHz and a GPU Intel HD Graphics (no more) at 200 MHz that can offer a resolution of 1,920 x 1,080 pixels.

A processor that will accompany 2GB of memory DDR3L-RS to 1,600 MHz, an amount as discussed below can rapidly fall short if we open many browser tabs and multiple applications at the same time. Here would have been better to make a greater effort by Intel, and it shows in the overall system performance.

We have 32 GB of internal capacity, and Conetica gain ground thanks to the inclusion of Intel Dual Band Wireless-AC 7265 chipset, which supports 802.11ac WiFi (up to 867 Mbps), two antennae, and a dual mode Bluetooth 4.0.

Another improvement is the inclusion excels that second USB 3.0 port that allows you to enjoy more options when connecting external peripherals, especially if you also use Bluetooth connectivity to make use of mice and keyboards of this type.

… But not especially in performance

Once we started using the new edition of Intel Compute Stick we find a miniPC that can effectively be used for sessions of light work, but despite improvements hardware does not offer comparable to minnows both portable format performance as on desktop.

The good news comes on the part of the graphics: performance tests show that here the improvement has been noticeable, which can take advantage especially when playing multimedia content. Although Intel offers support for 1080p monitors with this GPU, many users have already commented on how media and social networks is also possible to use UHD monitors, although of course the graphics performance of those resolutions is poor.

The second USB 3.0 port is an interesting help, but is even more relevant that 802.11ac connectivity that can offer better guarantees when using the Intel Compute Stick (2016) as a multimedia computer for streaming content. If you have an Xbox One also Podres take this module to play your games console on another TV or monitor with this device.

In normal working sessions, the team behaves decently if we put a lot of “pressure”, but things get complicated when we open many applications and many tabs in the browser. There when that memory is 2GB may fall short -we received a warning during one of the sessions work- and where the processor is also somewhat forced to undertake these tasks. That’s right: cooling based on a small fan seems well resolved and everything is silent. Scarcely we noticed a little buzz when the processor was working to its full potential.

That makes the Intel Compute Stick is a good companion on trips that have a monitor or a TV with an available HDMI port. You do not even need a keyboard and mouse: the Intel Remote Keyboard (utility Android, iOS) can take advantage of smartphones iOS and Android tablets and for use as virtual keyboards and touchpads easily, something that is certainly a wise choice for this type of product.