Surprising to arrive at the end of 2017 and find another one of those ultra portables that is just that: neither touch screen, nor 4K resolution, nor convertible to tablet. The HP Envy 13 is a pure notebook, and one that comes with strong specifications and careful design.

Those are two of the great strengths of this laptop, but perhaps the third is the most important: its restrained final price makes us face a team with an enviable price / performance ratio, but with important shadows. The arguments, of course. 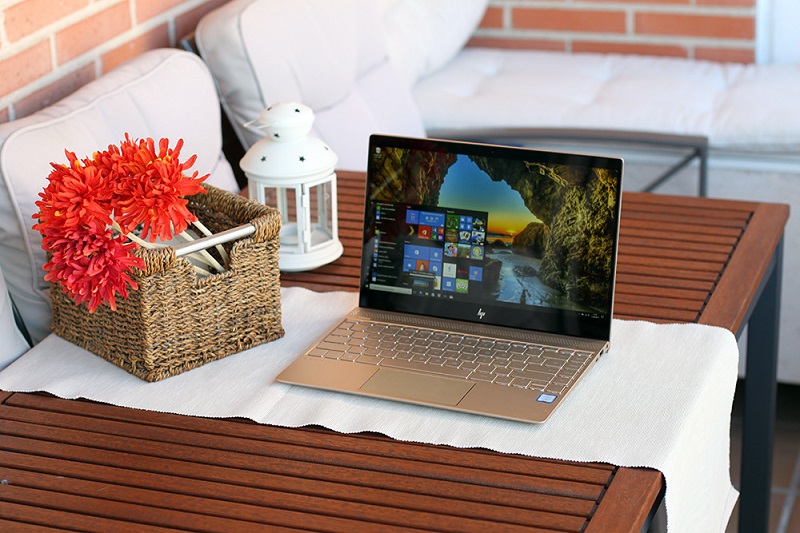 Few cracks can be found in the HP Envy 13, which stands out for a remarkable internal hardware. In it is protagonist an Intel Core i7-7500U Kaby Lake family that is one of the main responsible when it comes to achieving such good results in synthetic tests.

This processor is very well accompanied by 8 GB of DDR3 memory and no less than 512 GB of storage capacity in an SSD unit that makes use of the M.2 2280 format and NVMe technology to give exceptional performance in reading and writing.

In the rest of the sections that good choice of components is confirmed by HP, which integrates both USB-C and traditional USB-A (nothing of Thunderbolt 3, however, we will talk about it later), and a battery of 53.6 Wh that can be charged both by the aforementioned USB-C and through the conventional socket for the power adapter.

Some time ago we stopped finding laptops and “gray” tables in the catalogs of the manufacturers: the design has become a fundamental part of your bets, and that is noticeable in these Envy that to begin with make use of the new logo (chrome, of course) of HP in the upper case.

The model we have analyzed has been the golden color, an option that of course has its followers (not my case) and that in addition to that color provides another series of characteristic details. The first one is the peculiar “polygonal” hinge that makes when closed it highlights that aggressive lower edge of the screen, and then elegantly hide when opening the screen. 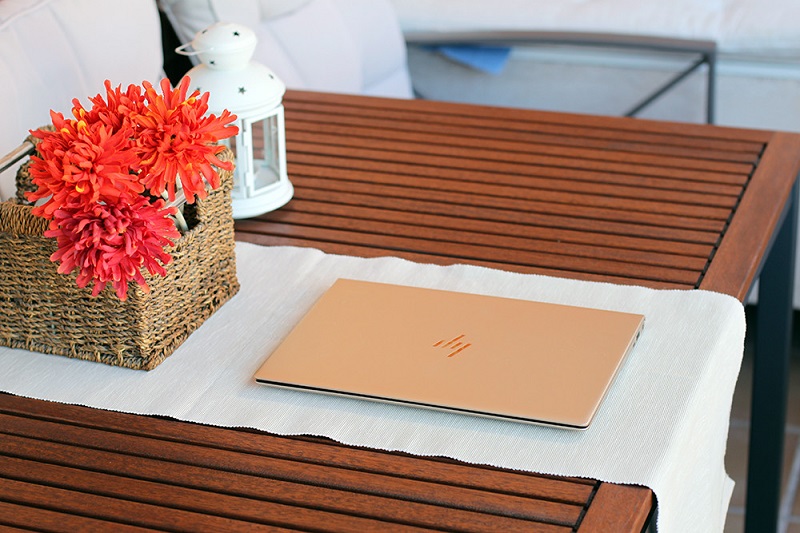 The edges of that end of the screen, however, are sharper than we would like. The mechanism works perfectly, and the two small rubber strips on that hinge base look curious because they fulfill their function perfectly: the metal does not scratch the table when you unfold the screen and use the laptop on it.

The frames on the screen are generous at the top (where the webcam is) and at the bottom, where the HP logo occupies a prominent position. On the sides, however, are reduced significantly (not much greater than those of the Dell XPS 13), and that makes the dimensions of this 13.3 inches are very acceptable.

At the top of the keyboard we find the loudspeaker grille, with a unique design that of course differentiates this team from others with a grid of “dots” without more. The mosaic formed by the small grooves is crowned by the logo of the company that has been collaborating and on time with HP: Bang & Olufsen.

The distribution of the keyboard is “almost” normal, and we quote the “almost” because, as with other manufacturers, HP includes a column of special keys to the right of the Enter key . Personally I am not very in favor of breaking that natural position of the Enter key, but in the end it is relatively easy to get used to and that row has the useful accesses to the beginning and end of the line or to the advance and recession of the page. Combine them for example with the cursors is the usual (and in my case, I prefer it), but HP’s solution can undoubtedly attract those who prefer to have those accesses directly on the keyboard. 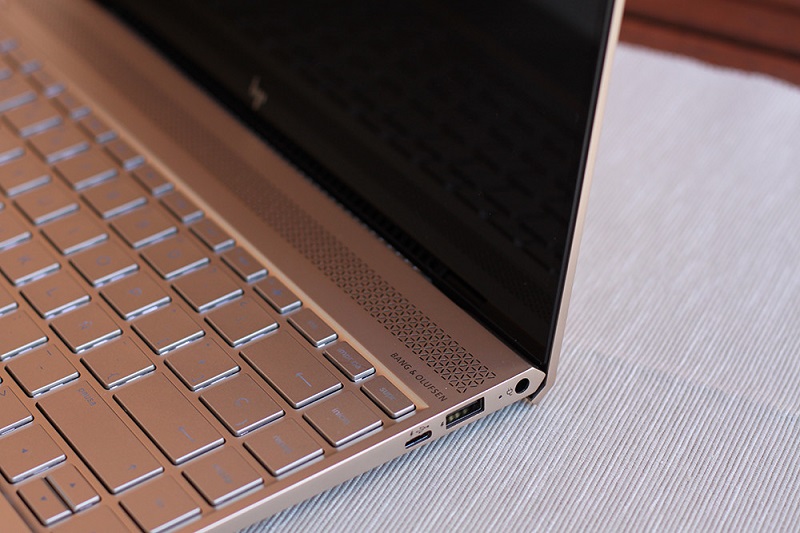 Although both USB-C ports are used to charge the laptop, HP also provide the adapter for that specific power outlet, as was the norm in portable equipment. Here it seems clear that HP has chosen not to limit the options and provide its users both alternatives both in charging and connecting USB devices, facilitating the transition to those USB-C ports that are beginning to dominate everything.

Both in weight (1350 g) and in size (the thickness does not reach 14 mm) we find a team very consistent with that diagonal screen of 13.3 inches that exhibits this HP Envy 13, but as we say, take this Laptop is almost immediately notice those ends and edges less beveled than we would like.

You may also like to read: Huawei MateBook X, a very attractive design for a very interesting laptop

Performance is not a problem

In the HP team we were as we said with a hardware configuration led by the Core i7-7500U that gives the team a lot of room for maneuver. This is demonstrated in the synthetic tests, which have given figures according to that micro and that are helped by the fantastic behavior of the storage unit.

These performance tests were confirmed by the numbers obtained in the Geekbench 4 test : 4106 points in Single Core and 8,378 points in Multi-Core, above the segment average, which is usually around 3500 and 7000 points respectively, although obviously That Core i7 helps a lot in those results. 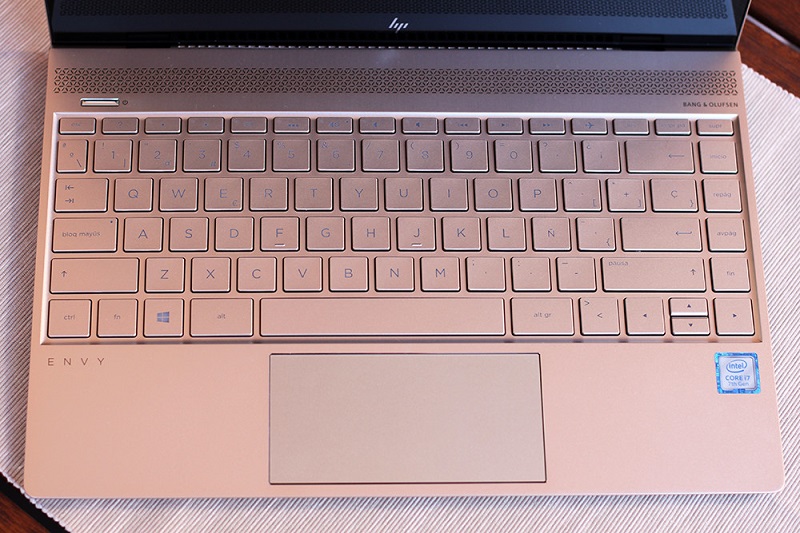 Both PCMark 8 Home and Creative the figures achieved are outstanding, and the same goes for the good work of the integrated GPU, an Intel HD Graphics 620, which will also allow you to play sessions with last-day video games in decent conditions as long as you do not go much the level of detail or the resolution. Again the data in 3DMark tests leave good feelings in this regard.

Where we have found a pleasant surprise is the performance of the SSD unit provided by Toshiba, which achieved 1712 MB / s in reading and 1034 MB / s in writing, a dizzying numbers for a laptop that are certainly a fantastic support for that process capability. NVMe technology continues to confirm its relevance when it comes to improving the performance of SSDs in portable and desktop computers.

This is how you work with the HP Envy 13

What can happen when analyzing a team with these characteristics is that this good specification sheet and that gross performance is then overshadowed by some other section. In the case of the HP Envy 13 there is only one that can harm the user experience, and that is the screen.

The 13.3-inch IPS screen has a 1080p resolution, a suitable choice to maximize the battery’s autonomy and because certainly in a diagonal as this have more resolution does not provide a differential improvement. What is important is the quality of the panel, which in this case can be somewhat compromised by the brightness of it. 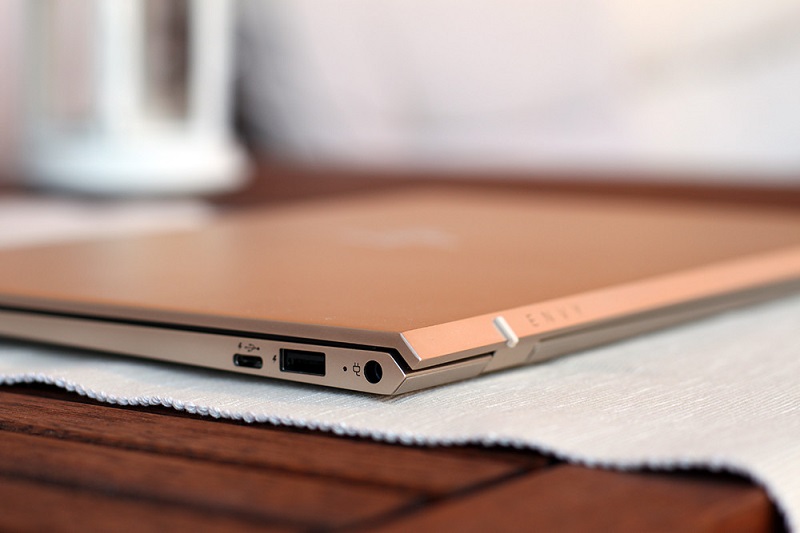 Even at maximum brightness that screen seems to be “somewhat off”, a feeling that is exacerbated when using it outdoors, where that ” glossy ” screen does not help. It is not a factor that weighs heavily in that final assessment, but of course it is a small blot on the team’s impeccable service sheet.

The keyboard, yes, behaves perfectly, with a touch and travel of the most appropriate. We have even gotten used to that last column of special keys without difficulty, and the speed of writing and the experience in doing so are remarkable. The keys have a good size and as expected HP provides a backlight system that, yes, only has two modes, on and off.

One of the unique problems of this keyboard is that the golden color is combined with the use of a gray color to mark each particular key that makes the contrast very bad : unless you are looking at it from the right angle, you will not see what each one corresponds to. key unless you turn on the backlight.

It also behaves well the touchpad, which supports all touch gestures of Windows 10. Although it is not the best we have tried (it is somewhat difficult to scroll accurately in some moments, although the specific configuration can help in this section), its operation is of course correct.

When it comes to playing multimedia content, the sound is certainly remarkable but not exceptional . The power is remarkable and there is a good balance in different types of music and video content, although at the maximum volume the distortion is perceptible. The image quality is equally decent, although as we said the brightness of the screen and its limited contrast make that especially in the outdoors that experience can be problematic. 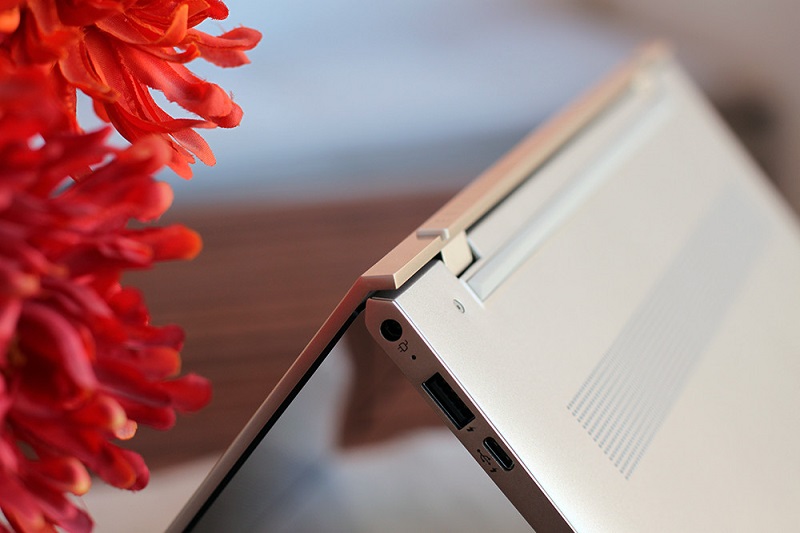 In the field of connectivity is great news that HP maintains a position that facilitates the transition to new standards: adopts USB-C ports, but without forgetting traditional USB-A. The pity, of course, is that in both we have the USB 3.1 Gen 1 interface. Not even Gen 2. with its transfer speeds of up to 10 Gbps and certainly nothing of Thunderbolt 3, a port that seems to be reserved for its Specter.

It is curious (and even dangerous) the integration of a MicroSD slot instead of the traditional SD, something that favors the current scenario in which we handle many cards of this format by our mobile devices, but which poses problems for example to photographers who use SD cards in their cameras to then pass those photos to the team.

Without an external reader it will not be possible. It is a pity also that a USB-C (or even USB-A) to Ethernet adapter has not been included to have a network port, but these adapters are also abundant in the market.

The equipment is silent except in the case that we use applications or games that express their power: this is where the cooling of the equipment comes into operation, causing a snort-high pitched sound, not particularly loud but certainly audible and usually decreasing in intensity after the first moments in which the two integrated fans are set at maximum revolutions per minute.

The battery, 53.6 Wh, allows to easily reach the 8 and a half hours of autonomy with conventional work sessions. This is what has happened in our tests with WiFi connectivity constantly activated while we were working on the writing of this analysis and other contents, browsing, editing images and playing multimedia content.

The recharge of that battery does not enjoy any fast charging system. In our tests we checked how to recharge from zero to 50% we had to wait 65 minutes (medium brightness, WiFi connectivity activated but hardly in use), figures not particularly high but not flashy either.