Still with the halo of exclusivity of the GTX 1080 and the highest range of new graphics Pascal Nvidia, reaches the market dedicated graphics solution easier and more affordable to the 10 series: the Nvidia GeForce 1050 GTX.

We have been testing the version of MSI, one of the manufacturers that offer custom GTX and 1050, because this model will not be Founders Edition. We face many different scenarios for testing. Who will get the most out of a graphics card like the GeForce GTX 1050? Is it enough for all types of games? And for virtual reality? In our review of the GeForce 1050 GTX will get you out of doubt with them all.

No Founders Edition cards, Nvidia has left to their regular partners placing on the market of its models GeForce GTX 1050. We have been tested these weeks the MSI GeForce GTX 1050 2G, its most basic, one – sink model and fan. In our test has proved to be more than enough for the heat that this graph generates to the maximum performance. 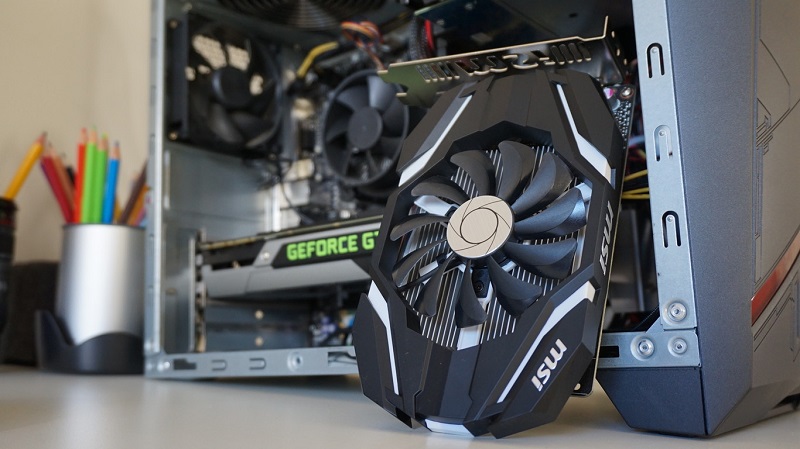 A feature of this graph is its size, much smaller than other models in the Nvidia 10 series. In addition, with a fairly low TDP, it does not require extra power, so you do not have that possibility and place is a matter of “pricking” and ready. Nor can we combine several of them in SLI.

This new GeForce GTX 1050 is the most basic Nvidia graphics card under its new generation. A little above in price is the GTX 1050 Ti, which basically adds twice GDDR5 memory up to 4 GB and modifies something both the base frequency as the maximum that can be achieved. As discussed below, it is a model that supports overclocking with MSI’s own tool, with quite outstanding performance in this aspect to their room for maneuver.

And of virtual reality? Steam tells us that it is not the most recommended card according to its test, and it is not certified with the minimum requirements according to Nvidia, so if you thought to buy it to enter the world of RV at home, better choose other solutions.

For performance testing of the new graphical input Nvidia and ASUS have counted on a desktop PC ASUS G11. Its base equipment consists of the Intel Core i7 6700 (Skylake) at 3.4 Ghz accompanied by 16 GB of RAM DDR4 2126 Mhz. The basic graph, with which we compare, among others, performance tests, is an Nvidia GTX980.

In addition, all components, including the graphics card testing, are updated to the latest drivers available at the time of the test.

We started testing the MSI GeForce GTX 1050 with a series of synthetic test we are going to put on the track of the place of this graphics card range input in the current market, mainly with rivals both AMD’s own Nvidia of the previous generation.

Viewing the data that shed the synthetic 3DMark tests, software that we use in our tests and graphic components, the GTX 1050 meets at the level of performance expected and can put virtually on par with the GTX 960 the previous generation.

The good performance of the Nvidia GeForce GTX 1050 consumption level, where we have already told you that the TDP is 75 W and peak power does not exceed 160 W, complete with a completely silent operation in all game scenarios And test those who have submitted, and with a fairly controlled operating temperature.

When we demand the most of this MSI GeForce 1050 GTX narrowly exceeds 60 degrees, being always below 65° C.

MSI makes available to Nvidia graphics a tool for overclocking. It is a point solution that we can use to get some more fps in certain games we believe that the 1050 GTX solution should give us more.

With the MSI Afterburner software can speed up this solution allowing overclocking level, and get average 5% performance increase.

The games we tested with the MSI GTX 1050 are full versions, set to 1080p resolution and Very Hight / Ultra profiles. Measurements of fps that we indicate are means made after 5 sessions of 10 minutes of play each title.

In the results we show below, the 1050 GTX demonstrates that with her more travel games last year have no problems running at 1080p resolution always with a rate of 30 fps. It is a performance superior to the most basic model of the new generation of AMD, and about half that of the GTX 980 reference of the previous generation of Nvidia.

If we choose to reduce the configuration profiles Hight certain games, we’ll be moving us according to our tests between 50 and 60 fps in most titles. In The Division the GTX 1050 stayed in 51 fps, one more than in Rise of Tomb Raider. With GTA V we easily overcome the 60 fps and the meter measured in our tests more than 70 fps.