Liquid cooling of the CPUs has always been considered the hunting ground of assembly nerds, above all because, given the particular components and the fact that liquids are being introduced inside the case, the system requires special care with regards long term maintenance. The advantages compared to normal air coolers are, however, obvious: by exploiting increasingly efficient heat exchange technologies over the years, the cooling capacities of liquid systems are clearly superior to the traditional ones.

For this reason, many companies have decided to develop systems as integrated as possible to allow any type of user to adopt these solutions designed to get married with even very heavy overclocking. The answer to this requirement of Enermax is the Liqtech II system available in three different versions: 240, 280 and 360. Today we will put the first to the test, which is also the most accessible product on the market given the rather low cost. The system is essentially composed of three elements: the actual water block to be mounted on the CPU, compatible with Intel and AMD sockets (see box), the cooling block equipped with coil and fans and the two 40-cm-long polyamide pipes which connect the two main units.

The system is therefore rather articulated but the length of the pipes allows to fit its installation in any self-respecting middletower case. The liquid inside is hermetically sealed so evaporation is minimal over the years and above all it is not necessary to periodically clean it, given the complete impermeability of the system and the impossibility of developing bacteria of any kind, an element underlying the need to carry out periodic cleaning of the system as happens in traditional systems. 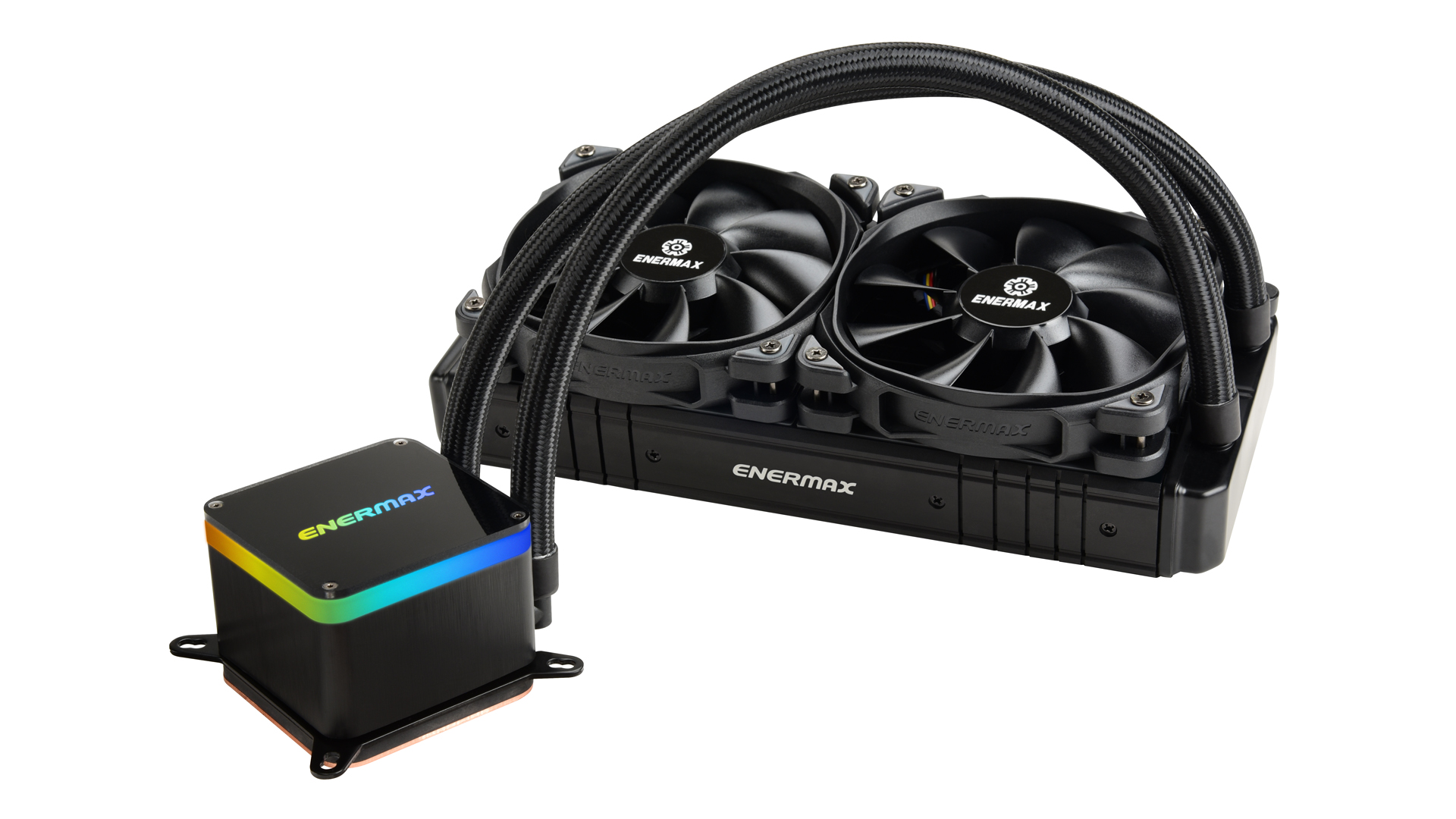 We talk about the quality of materials in abundance on the occasion of unboxing: Enermax used high quality plastics for all the components: the waterblock is characterized by a copper base integrated with a hard plastic frame that contains the micropump and integrates the LED strip RGB controllable via a remote or connectable to a motherboard or three-pin control device. Excellent care placed in the fans, characterized by an assembly with rubber bearings to reduce vibrations and rubber hoses, practically indestructible despite considerable flexibility, especially in the joints. Just the joints between water block and dissipation system are sealed with high-strength glue and characterized by a high-level assembly: unlikely to have problems in the long run.

The test bench of our test was a system with an Intel I7 8700K processor mounted on an Aorus Z390 Elite motherboard equipped with an Nvidia GTX 2070 video card and 16 GB of DDR4 @ 3GHz Ram. The case is the cool review by Sharkoon NightShark with all three fans activated. All tests took place with the ambient temperature ranging between 19 and 20 degrees. The comparison was made with a traditional Cryorig CR-H7A heat sink, very generous in size and a good benchmark for temperatures in a gaming comparison. The games we tested were three, all quite challenging for our processor: Ghost Recon Wildlands, Assetto Corsa Competizione (Early Access) and Wolfenstein 2: The New Colossus. We made the first detections in idle with Windows 10 active, and after about thirty minutes of intense play to see how the stability of the system behaved and to see if there were significant variations. With the games we obviously overclocked our processor, respectively at 3.7, 4.1 and 4.5 GHz, the maximum possible turbo speed allowed by this processor recommended by the manufacturer.

The results were quite interesting, obviously in the gaming field: in fact, both the Enermax Liqtech II 240 and the Cryorig CR-H7A remained quietly anchored to the 31 degrees at stock speeds even in overclocking mode at 4.1 GHz. raised to 34 degrees at 4.5 GHz but nothing really relevant. The real test was that of games and here the Enermax liquid sink started to make a difference, especially during the highest overclocking. It should be noted that the values shown are average operating values for both heat sinks detected after ten minutes of play for at least another ten minutes of uninterrupted play.

At the first overclocking 3.7 GHz step of Ghost Recon Wildlands, Assetto Corsa Competizione and Wolfenstein 2, we detected values of 62° / 57°, 66° / 61° and 59° / 54° respectively with the Enermax heat sink always in the lead of about five degrees compared to the traditional Cryorig. Following the same progression and carrying out the same tests at 4.2 GHz, temperatures rose significantly to 68° / 61°, 72° / 64° and 65° / 59° respectively. In this case we noticed some oscillations in the cooling of the LiqTech II 240 which brought the value to rise by one or two degrees for a few seconds and then return to the average detected, probably due to the greater slowness of the pump to bring liquid cooled by the radiator to heatsink, however compensated by the much lower temperatures guaranteed by this system. 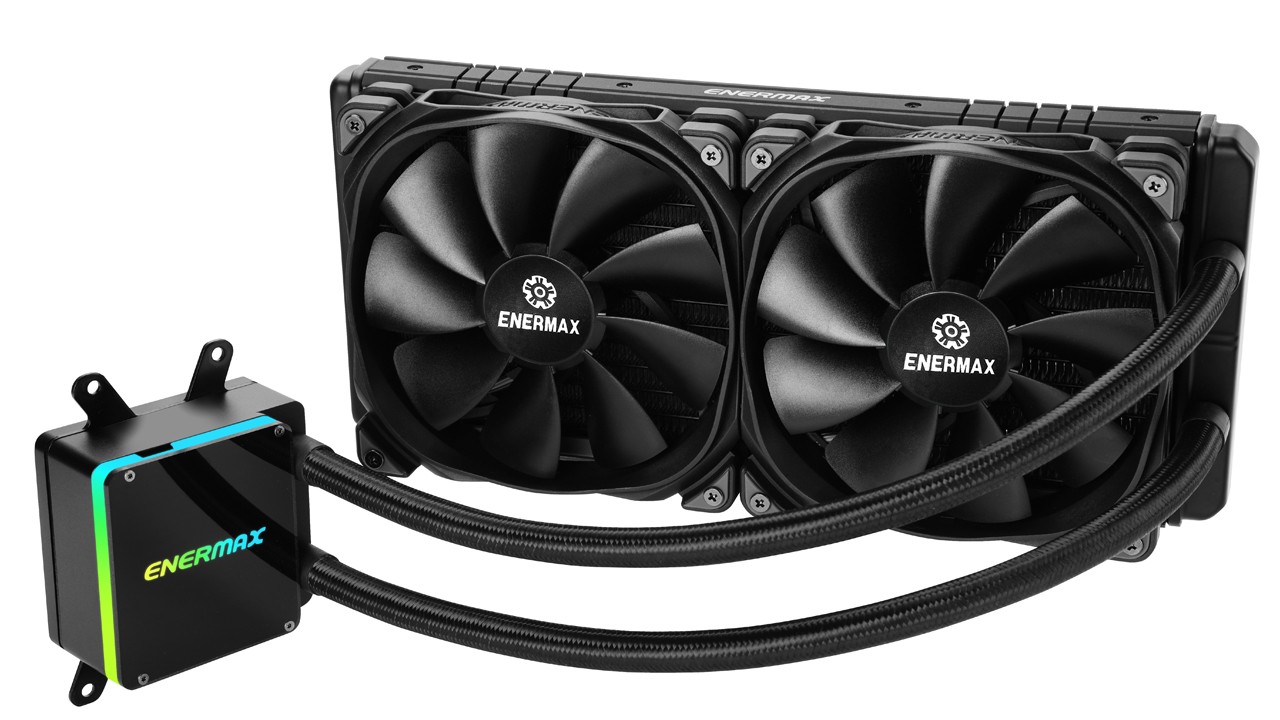 The fire test (in all senses) we had with the maximum overclocking of our Intel 8700K at 4.5 GHz. In this case the Cryorig showed shortness of breath on Assetto Corsa Competizione with temperatures beyond the guard threshold also caused some stuttering of the game in a couple of moments, without going into protection. The values rose again with a comparison of 76° / 69°, 81° / 73° and 74/67°. The progression is evident: with the increase in the clock, the greater dissipating power is highlighted but also the different commitment of the CPU depending on the game used.

The very high Assetto Corsa Competizione temperatures confirm the decidedly superior use made by the physics of the Kunos game compared to the Ubisoft and Bethesda shooters. This led the fans to run at higher speeds and we noticed a slight increase in the overall noise of the case which only in the case of overclocking at 4.1 and 4.5 GHz led to a perceived increase of 2 and 4 decibels compared to 37 decibels standard noise levels related to case and power supply fans.

A rather clear picture emerges: with low overclocking, the gain is rather small but present with an average temperature lower than 4.5 degrees compared to the air cooler: the gap opens up to the maximum clock possible, while remaining within the recommended limits from the manufacturer, with values that leave quiet even for prolonged use in liquid dissipation mode, while they would advise caution using traditional heat sinks. It should also be remembered that the conditions of the test were rather favorable: it was a winter test carried out with only 20 degrees of environmental temperature and inside a well-ventilated house: the values are therefore destined to rise with less equipped houses on the flow front interior and especially on hot summer days.

In this sense, liquid systems such as this Enermax Liqtech II 240 give that room to maneuver compared to traditional heat sinks and this unit performs its task more than notably, considering it is the “entry level” model of the entire range: the 360 versions are characterized respectively by a larger dissipation system and an additional fan. It is therefore legitimate to expect even higher performance to cope with even more extreme overclocking for higher-end models, although in this case the cost is clearly higher.

And there is no mention of a few change because the Enermax Liqtech II 240 is a “basic” solution whose cost is around 120 dollars, much higher than that of a medium-high end fan. However, superior performance is not in question, as is the aesthetics of the Aurabelt RGB system. The Enermax Liqtech II 240 is therefore a product that we feel we can recommend to overclocking enthusiasts and case modding with some extra money to spend, even if they have systems with CPU AMD Threadripper.

The construction quality seems excellent and we have not noticed any defects in the assembly: considering Enermax’s experience in this sector and the fact that it is a revised and corrected version of the first generation Liqtech, there are all the prerequisites for a reliable product over time (the MTBF of the pump is over 100,000 hours, that of the fans at 160000), without the maintenance hassles that the modular cooling systems bring with them. The investment makes less sense for players who do not have particularly strong overclocking ambitions: the latter will be able to continue to rely on the fans of fantasia memory without big worries.