If they told us to describe quickly what the Mavic Air is like, perhaps, it would suffice to say that it is the best consumer drone on the market. It sounds exaggerated but after a few weeks trying it little or almost nothing bad we can say about it.

If you are interested in the world of drones, if you want to buy your first drone or just wondering if it is worthwhile or not to change your current model, we hope that this analysis will answer all possible doubts you may have. 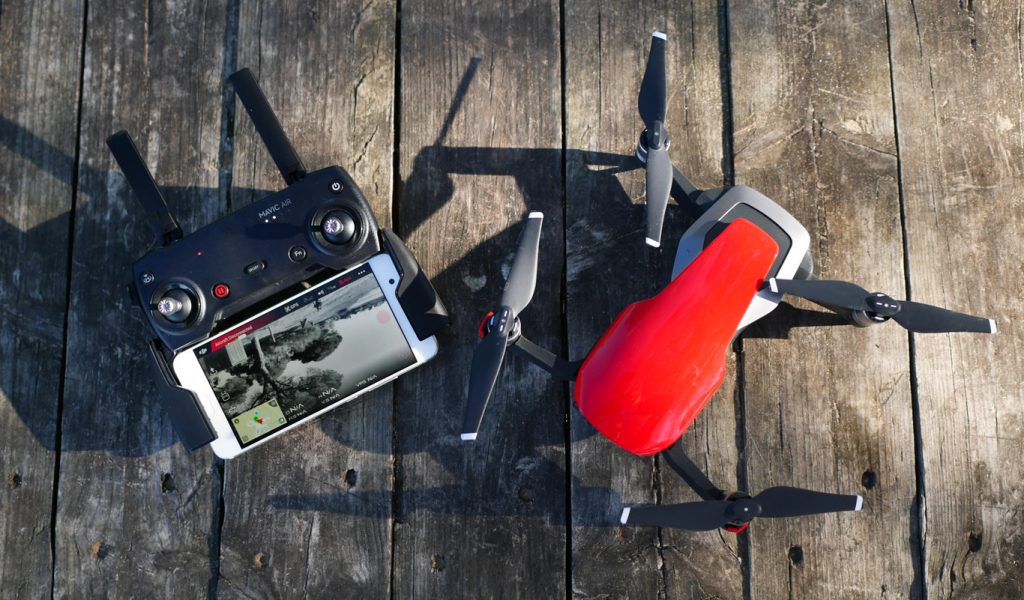 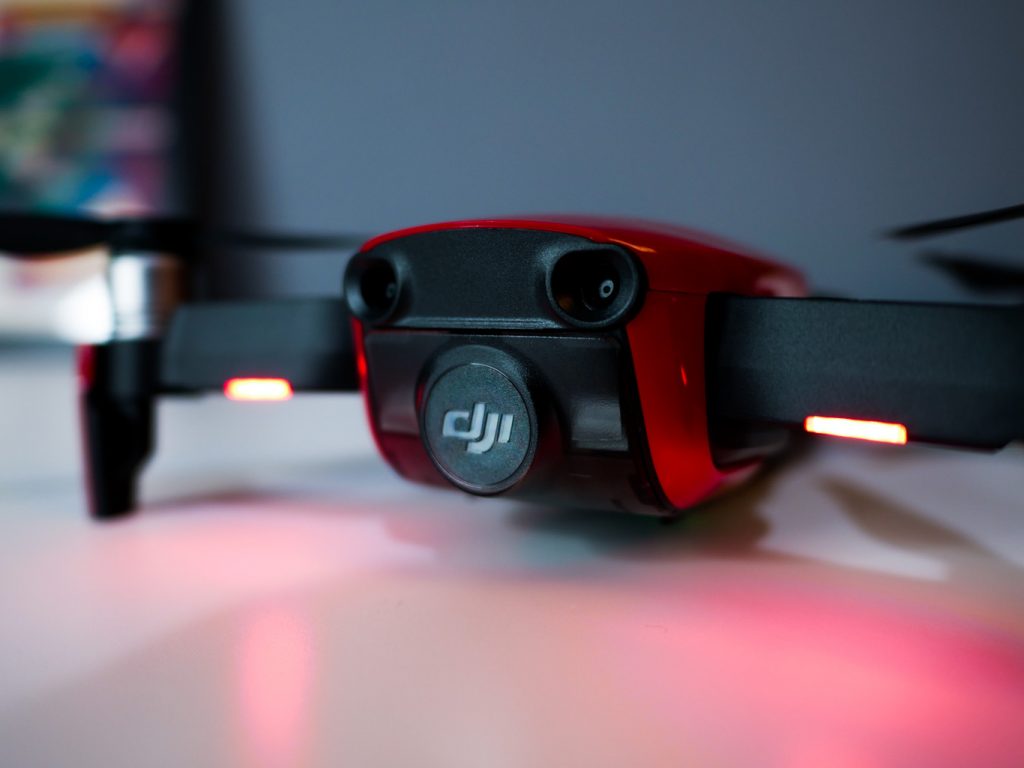 Looking at the Mavic Air technical data sheet, the first thing that comes to mind is whether benefits cannibalize both Spark and Mavic Pro. The truth is that in part it does. Even by price, because for a little more you have a better product than the Spark and for something less one as attractive as the Mavic Pro. Still, all three have arguments to be the perfect choice for each user.

However, we are convinced that the last thing that concerns DJI is that its new drone rivals the rest of its catalog. Whoever is interested in Spark will continue buying it. Like anyone who wants a more stable drone and with the improvement that OcuSync brings will go for the Maivic Pro. But with Mavic Air what DJI has achieved is to expand the offer, and now they are able to offer the perfect option for each type of user and their needs.

A design with the best of Spark and Mavic Pro 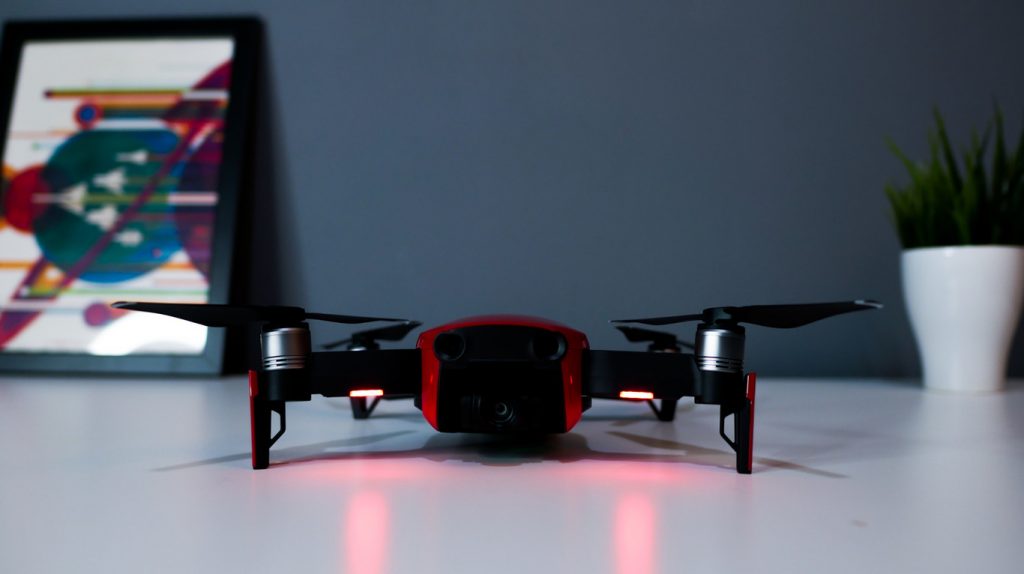 The Mavic Air is a drone with a really small dimensions, the diagonal between propeller and propeller is only 213mm, where all the good stuff of Spark and Mavic Pro is mixed. That is, it is small and thanks to its folding arms make it very comfortable to transport in a backpack or even the coat pocket or jacket. Few excuses we can put to not always carry it.

Manufactured in plastic mainly, the quality of the finishes and aesthetics in general is very good. The shiny finish and those details that make it more aerodynamic we think everyone will like it. This also allows you to enjoy a different touch to Spark and transmit better sensations in hand.

As you can see, at the physical level little or nothing can be reproached. The only thing that can generate some doubt are its articulated arms. With the Mavic Pro also happened to us, we considered to what extent they would withstand the passage of time. But seen what has been seen has not been a problem nor do we believe that it is in this Mavic Air. 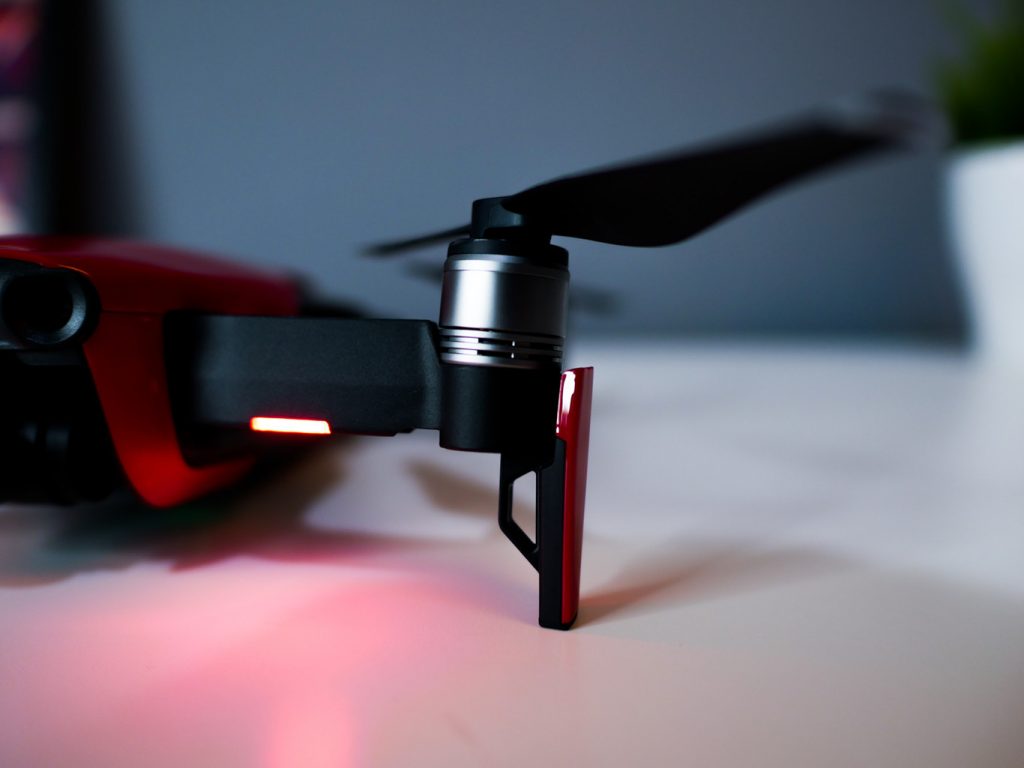 Revisiting the drone a little more, we see how the removable battery is located in the lower part, which fuses perfectly with the device’s own body. Also the gimbal with the camera that is now somewhat more protected during the flight. And whose cover to protect it while we transport it is also more comfortable to put on and even more efficient.

And little else, the last or the last elements to stand out are the multiple sensors and the two folding antennas that are placed in the front arms. These allow to improve the wifi transmission at the same time to raise the height of the drone when it takes off or lands, thus preventing the camera from touching the ground.

This is the experience of flying the Mavic Air

If you have flown a DJI drone you will know what we are going to tell you, flying the Mavic Air is easy and addictive. By dimensions, intelligence in the flight and the own precision that offers its command to fly it turns into a very rewarding experience. However, we always have the experience of Francisco Serrano, who gives us his feedback to complement our impressions. 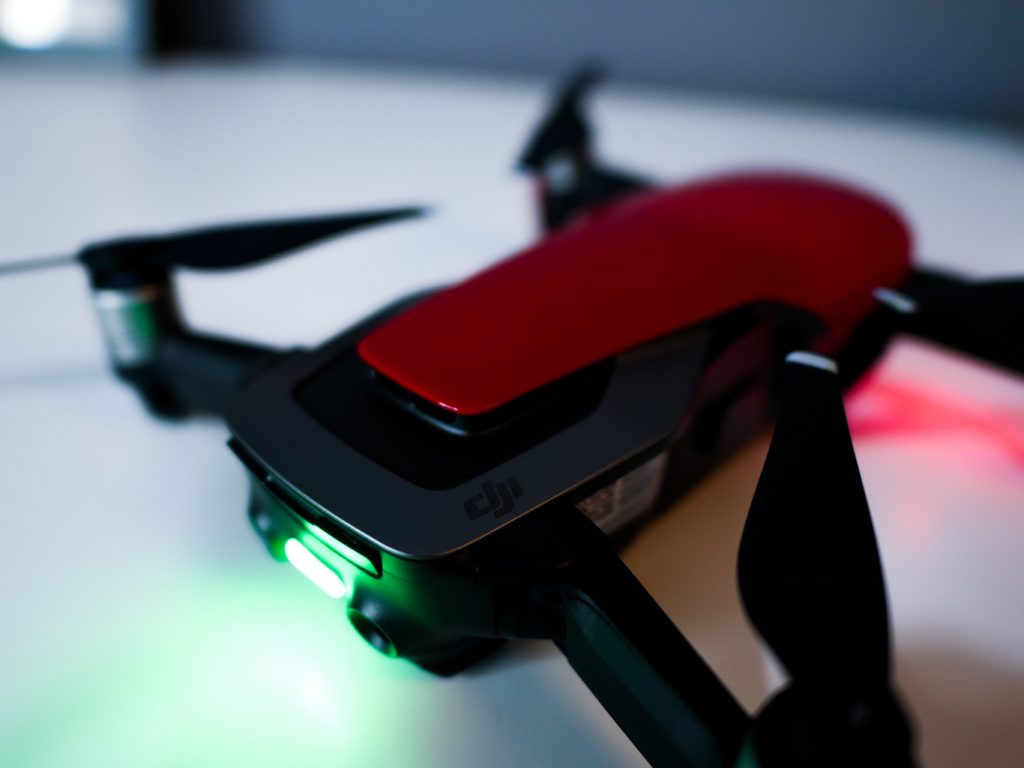 Learning how the application works and all the options it offers will not be a long-term thing to do. In a matter of minutes and after following the indications we can start. That yes, always respecting the laws of each country and without compromising the security or privacy of anyone.

With a very compact remote control, where we can place our smartphone – there are several adapter cables according to the microUSB connector, USB C or Lightning – the main details that stand out is that we no longer have a screen like the Mavic Pro and that the levers can be unscrewed.

The control with the control is precise and much more satisfactory than if we use only the mobile application or the gestures. Two control options that may be useful but do not allow to exploit the full potential of the device. So our recommendation is always to opt for the joint purchase of the command. By the way, the command is exclusive. If you have thought about using it with a Spark or take advantage of this or the Mavic Pro with the Mavic Air forget it because you can not. 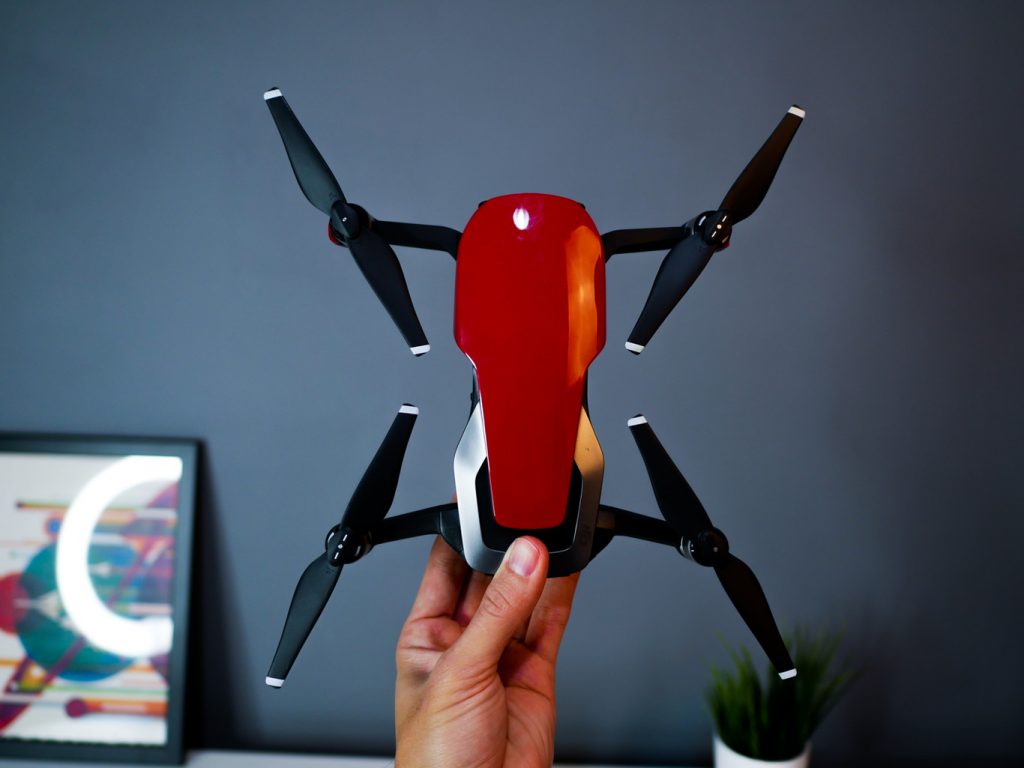 Speaking of the transmission, the Mavic Air does not use the OcuSync system seen in the Mavic Pro. Everything goes via wifi here. This connection has been improved thanks to the new antenna system placed on the front legs . Even so, it will not reach Pro model levels. Another important thing that we should know is that, by legislation, in the US the Mavic Air achieves a range of almost 4km while in Europe and other countries it is limited to 2km.

In our tests there were only a couple of specific moments where, due to interference, we lost the signal. But thanks to the safety system the drone returned to the takeoff point automatically. So on a global level the system works well and the coverage it gives us, around a mile and a half, is more than correct. It is also a distance that may seem small but if we consider that it is advisable to always have the drone in view is more than enough. Because as soon as 200 or 300 meters away is easy to lose sight of.

To enjoy more of each departure to fly the drone it is advisable to have several batteries. With 2375 mAh the autonomy from 100% to 0% is about 21 minutes. As we are not going to squeeze it so much, with the safety notice established between 30% or 15% so that you have time to return, the average flight time will be about 17 minutes. If there is more wind or some other conditions that affect the flight the autonomy could decrease. So buy at least one extra battery to enjoy more at each exit. 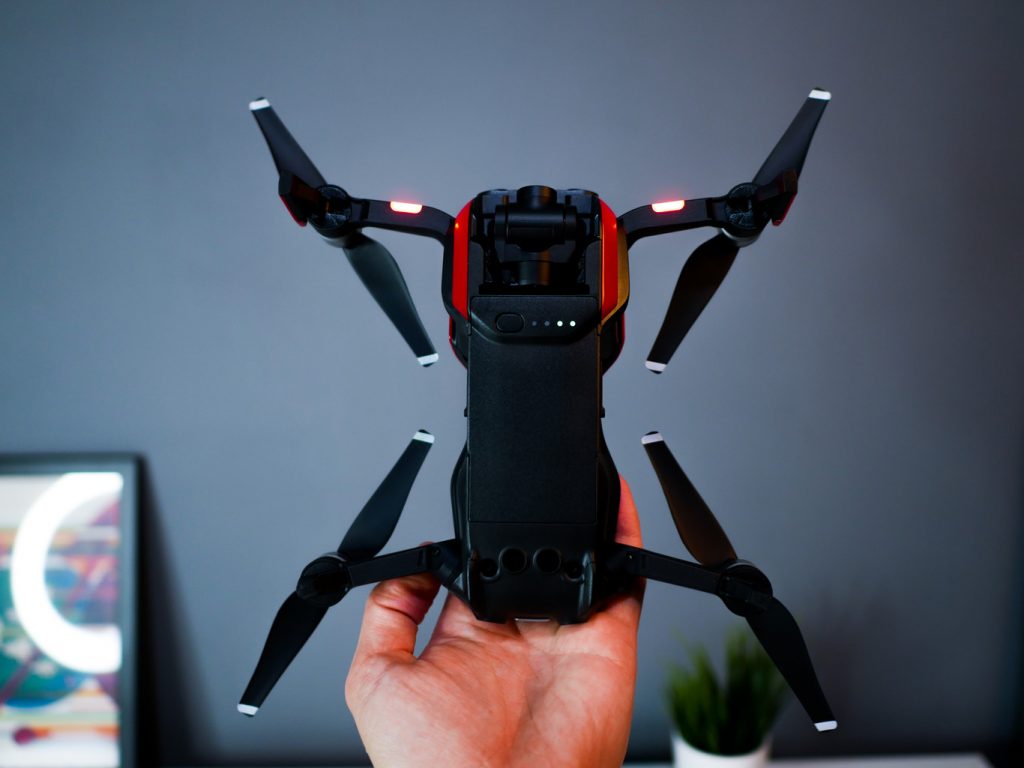 As we spoke of wind say that although in theory endures gusts of 30 km / h the truth is that you can see how they push even slower gusts. Therefore it is advisable extreme precautions when there is wind or simply look for more favorable weather conditions.

Once in flight, the Mavic Air offers different flight modes that go from a sport mode (recommended only for experienced pilots) to the new planet or Boomerang modes that allow you to perform established movements with which to achieve more attractive planes with less effort. The modes we already knew from previous models such as tripod or tracking modes are quite accurate in this model.

Regarding the sensors, these facilitate and make the flight safer for any type of user but especially for the less experienced. In addition, in this Mavic Air we have a functionality that thanks to these sensors allow the drone not only to detect obstacles but to decide how to avoid them to continue with the flight.

Of course the sensors, although they are very helpful, are not 100% infallible. There will be situations where in low light or with lots of light may have problems to detect possible obstacles. But by normal general they work very well. 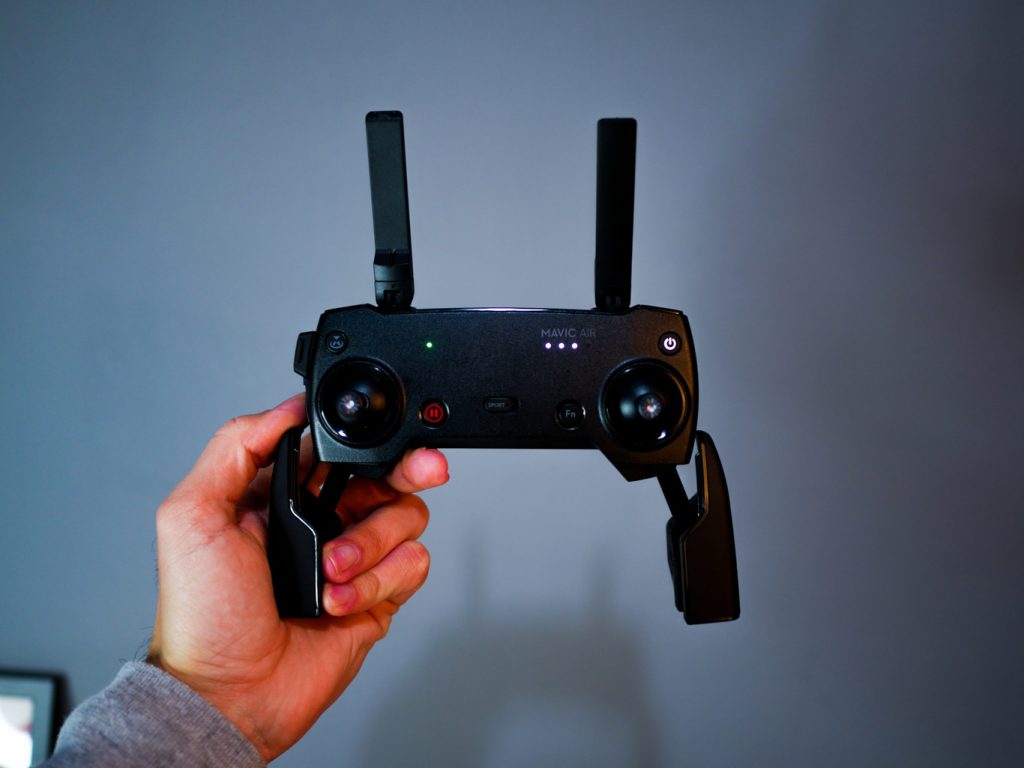 Video, photo and other extras for the more multimedia side of the Mavic Air

Flying the Mavic Air is fun, addictive and easier than it might seem, but surely what matters most are its multimedia capabilities, which have improved compared to what Spark offered.

The Mavic Air is capable of recording video at 4K and 30p. A lower frame rate than the Pro model but with a higher bitrate that offers more quality in video clips. Of course, the highest bitrate only applies when recording at maximum resolution. When we select other video options the bitrate is reduced and adjusted to the needs.

With this in mind the video capabilities of the Mavic Air give a lot of play. At the level of quality, the drone is capable of capturing very good images. The only less positive point is that we will only have normal profile and D-Cinelike (MP4 / Mov – H.264 / MPEG-4 AVC). No option D-Log that would give us more game in postproduction but hey, it is understandable that any difference kept against the Mavic Pro.

In photographic subjects the Mavic Air allows photos of 12MP, HDR mode as well as the same possibilities as in video of manual controls. Capturing the images in both JPEG and DNG (Raw) formats.

Then we have a new mode that generates a planet after an automatic process where the drone is turning and capturing our entire environment from above.

The quality of both the video and the photos of this new Mavic Air will surprise many users. They do not reach the level of much more professional and advanced solutions such as the DJi Inspire 2 but for millions of content creators, both amateur and professional, it is a tool of high value in their productions.

To record we will have to resort to high speed microSD cards. Although it must be said that the Mavic Pro includes an internal memory of 8GB. Maybe some of you think that 8Gb offering 4K recording is something ridiculous.

It is true that greater capacity would be better but in spite of that it is a point in its favor, because more than one at some time we have left the microSD card at home because of confusion. So getting to the site and having at least the possibility of recording something in the internal memory is appreciated.