web2gb.com
Powerful Simplicity
Home » Hardware Reviews » A miniPC with Linux and WiFi of 4 dollars is possible thanks to VoCore2

Get away, Raspberry Pi. That’s what they seem to be shouting responsible for VoCore2, a tiny computer the size of a coin that nevertheless is able to offer some surprising benefits by $4.

VoCore2 is a miniPC that takes advantage of the versatility of Linux and can be connected to all kinds of devices to provide eye-catching options. We can turn it into a wireless router, a VPN gateway, a station AirPlay to play music even in lossless formats and also the basis of a private cloud to store our photos, videos, or code. 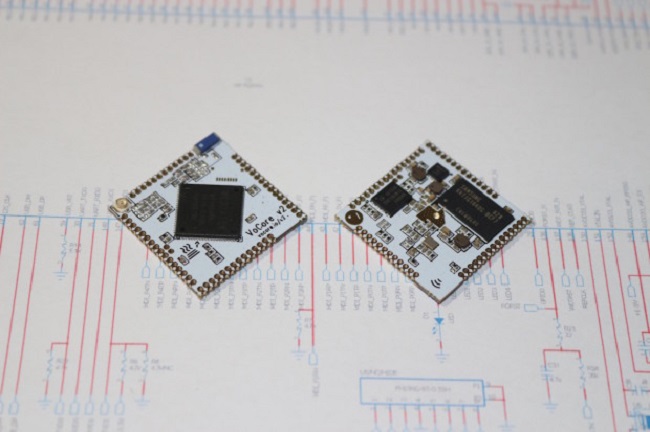 Different versions for a surprising miniPC

There are different versions of VoCore2, and first of all we have the Lite, which found a SoC MT7688AN MediaTek 580 MHz, 64 MB of RAM DDR2, 8MB of storage NOR and a slot for WiFi antennas, and all for $4. Hallucinatory.

If we want to go a little further we may appreciate it. For $ 12 we have the same SoC but DDR2 128 MB of RAM, 16 MB NOR storage and two slots for WiFi antennas (we double the bandwidth to 300 Mbps) and even support for PCIe 1.1 devices.

The low consumption of this miniPC (74mA in idle mode, 230 mA at full throttle) makes even with an external battery of 10,000 mAh the VoCore2 can run for 4 days. There are interesting for feed alternatives, and indeed an optional dock ($ 29 total) on which assemble the chip enable feed via PoE (Power over Ethernet) and also provide a headphone port, another USB 2.0 and a micro SD slot.

The project is already underway in a collective financing campaign in IndieGogo which is having remarkable success. The VoCore2 reach users in December 2016 or January 2017, depending on the version and proposes a new alternative to the already popular Raspberry Pi and its various competitors.